(pictures courtesy of the author)

I recently had the pleasure of presenting my workshop oral presentation, “Dancing the Connected Body: Exploration of Bipedalism to Artistic Expression through the Lens of Anatomy Trains®” to the 2018 Movement, Brain, Body and Cognition held this year July 27-29 at Harvard Medical. While the conference (in its second year- see last year’s summary blog here) is still figuring out its rhythm in multiple senses, the conference strives to connect those interested in the body, including neuroscientists, doctors, therapists and movers from different academic and artistic backgrounds. “The purpose of the conference is to share knowledge of all those whose interests lie in the nature of human movement and its relation to cognitive function.” (www.movementis.com) 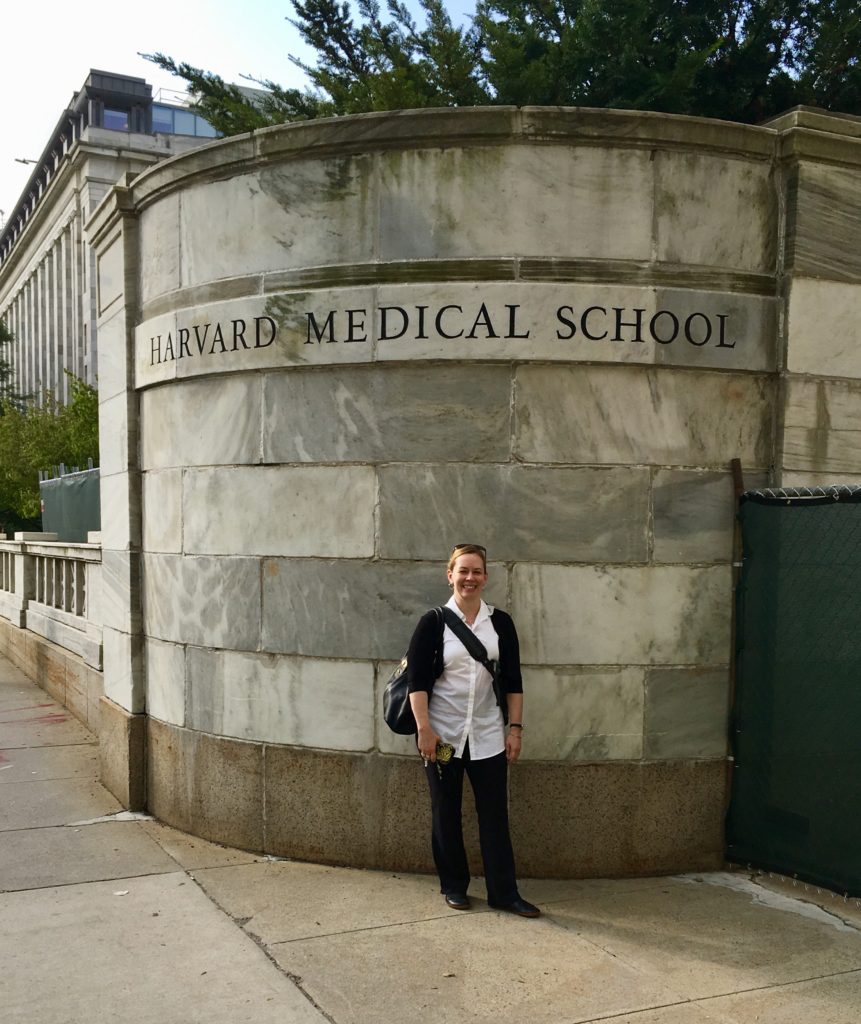 Tom’s concept of spatial medicine, outlined in the Journal of Bodywork and Movement Therapies in his article, “Spatial Medicine- A call to ‘Arms’”) is at home with this crowd, although the medical profession is still just learning about thinking in terms of connected myofascial anatomy, particularly in terms of movement. Several of those from physical therapy, movement studies or movement somatic backgrounds who came to my presentation commented on being interested in Tom’s book and being impressed with the cross-discipline approach to health and healing. My own premise for this presentation was to be able to expand in a fuller hour-long format some of the work I’ve previously presented both at last year’s Oxford conference as well as for the American Association of Anatomists at the 2018 Experimental Biology conference.

My presentation at Harvard focused on how we as bipedal humans became myofascially efficient, and that dance, wonderful for its social, mental and general health benefits, is also a means to practice our coordination in tensegrity. With an hour-long format, I had time to dive deeper and I was pleased to present to a packed room with an attentive and engaged audience, some of whom have met me in the past. 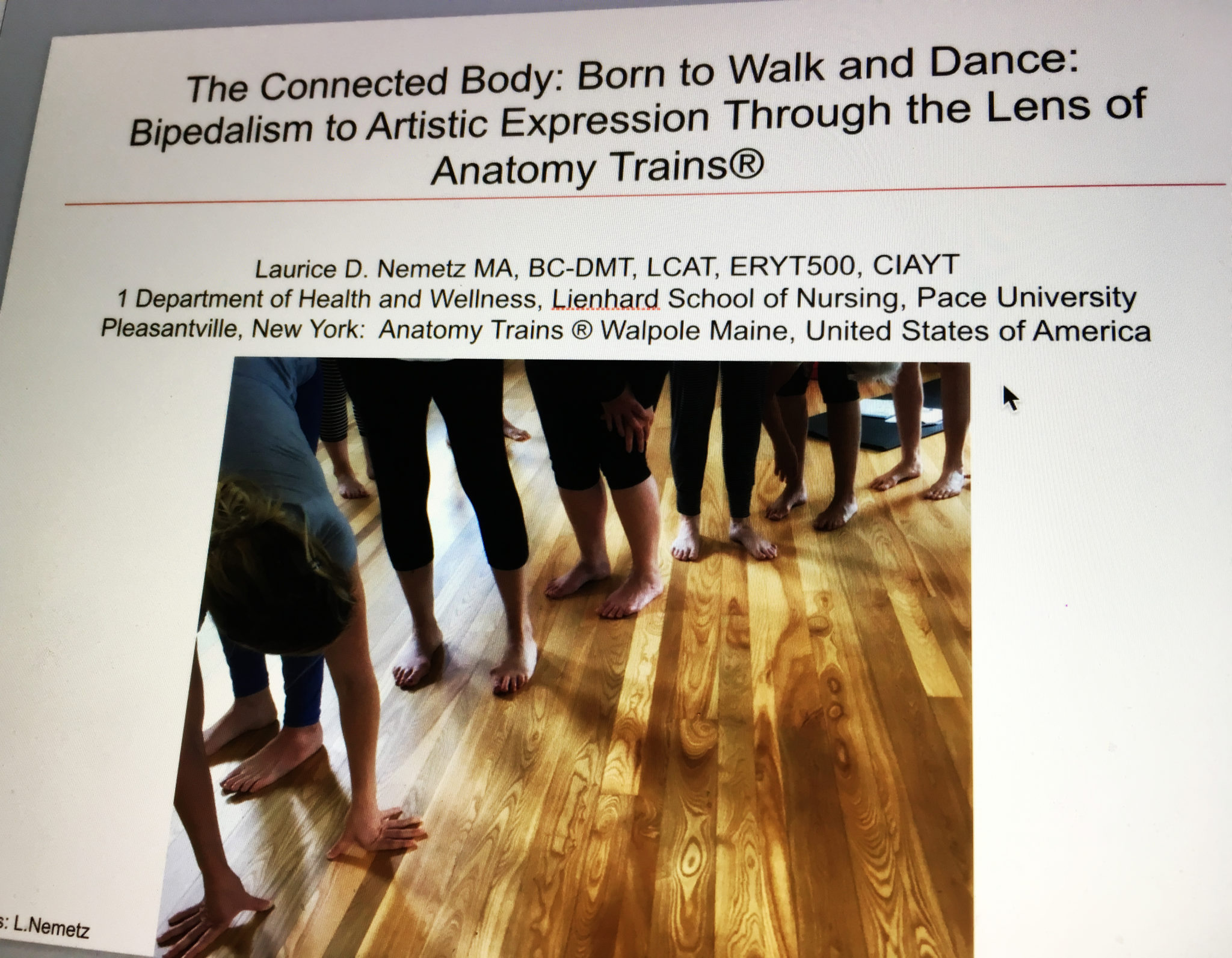 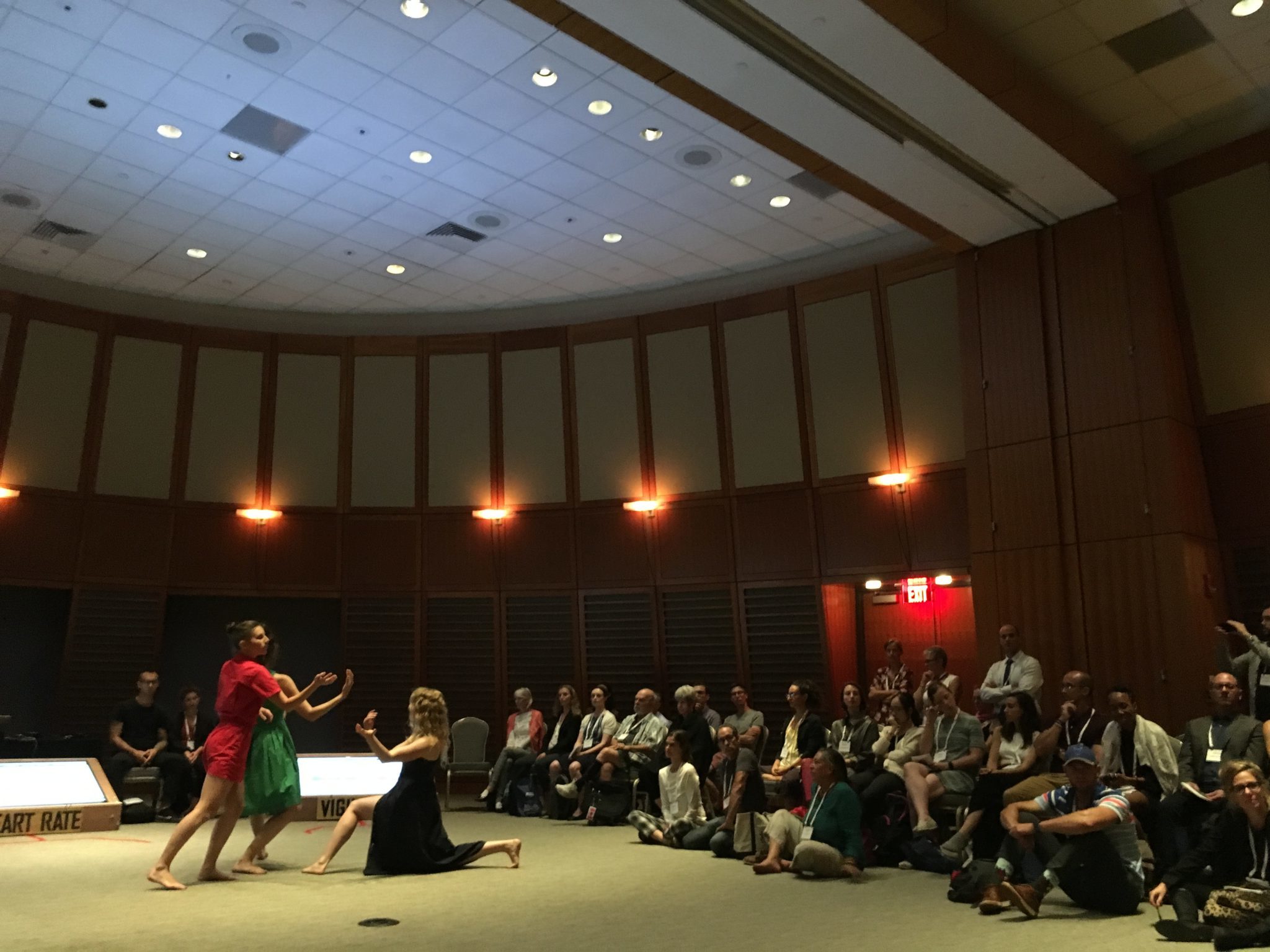 This conference, as noted, was rich in speakers from a number of professions and backgrounds including my original field of dance/movement therapy to other movers, thinkers and doctors with various interests in neuro-movement connections. Author Dr. John Ratey of “Spark: The Revolutionary New Science of Exercise and the Brain” was one of the keynotes. He is an Associate Clinical Professor of Psychiatry at Harvard Medical School and known for increasing public awareness on how exercise can help reduce clinical depression, and the link in general between movement expression and well-being. He posts frequently on new publications particularly those highlighting exercise and connections (he has an open page on Facebook under John Ratey, MD). He is also involved with the “Harvard on the Move” program to increase physical and psychological benefits for the Harvard community through movement. Dr. Dan Lieberman (author of “The Story of the Human Body”, etc) is also part of this program and was mentioned in his talk.

Several excellent presentations focused on gait or spatial use, but one of my absolute favorites was a small workshop that explored lateral thinking, from Jaime Polanco of Spain, which was entitled, “Cognition Under Examinations: Illusionism, Lateral Thinking and Somatic.” The term “lateral thinking”, coined by Edward de Bono, is about shifting perception and creative thinking. This presenter looked at how traditional magic tricks are all about this: a slight of hand while having the audience distracted by the way they are processing thought, and how the brain is distracted by what its thinks it knows. He did perform a few impressive magic tricks (only revealing his methods in one) in order to show how the brain follows or is misled through sound, movement and action. In a similar way, he led us through several Feldenkrais exercises, again showing how changing the perceived association of movement and cuing can change the movement produced in a positive way.

One of the founders of the conference, Dr. Gerry Leisman, talked in his keynote about his own experience of giving a talk at Oxford several years back about the importance of movement. After making a statement on how critical movement was to mental function, (his exact line was, “If you don’t move you get stupid”), he looked out at the crowd and realized the renowned scientist Stephen Hawking, who had amyotrophic lateral sclerosis (ALS), was a member of the audience, and as Dr. Leisman noted, “fairly brilliant”. He came up to Hawking afterwards to apologize, and Hawking said not to worry and that he quite agreed, and in fact had played an hour of tennis that morning. When Dr. Leisman gave a questioning look, Hawking continued to explain that he mentally practiced movement in his mind everyday and that was an important part of his daily routine in keeping himself healthy. In other words, movement matters, even when we are thinking it. The link is meaningful.

After the conference I visited the Warren Anatomical Museum (begun in 1847 by Dr. John Collins Warren) which displays a portion of its collection inside the medical library on campus. This collection features specimens such as the skull of Phineas Gage, the railroad foreman who had an unfortunate accident with a tamping iron that blew through his left frontal lobe. The connections between the changes of his personality, but also what his remaining brain could or could not process post-accident further impacted the field of neurology and psychology. The motto of this museum is appropriately, “mortui vivos docent; the dead teach the living”. 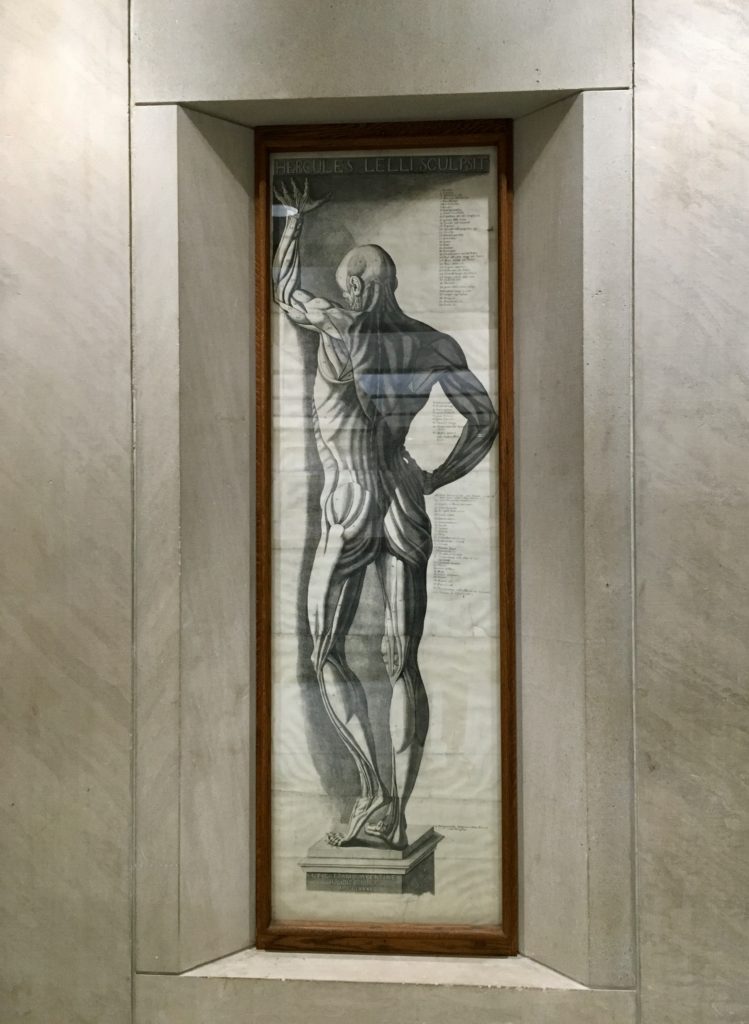 I wrapped up my final time in Boston with a visit to the Boston Museum of Fine Arts, where I spent hours as an undergraduate art history student, studying. I often mention in my workshops that those observation skills greatly helped my later psychology, movement and dissection work. Art for me has always been another expression of movement, and taking that a step further, as Columbian neuroscientist Rodolfo Llinas wrote, “that which we call thinking is the evolutionary internalization of movement.” 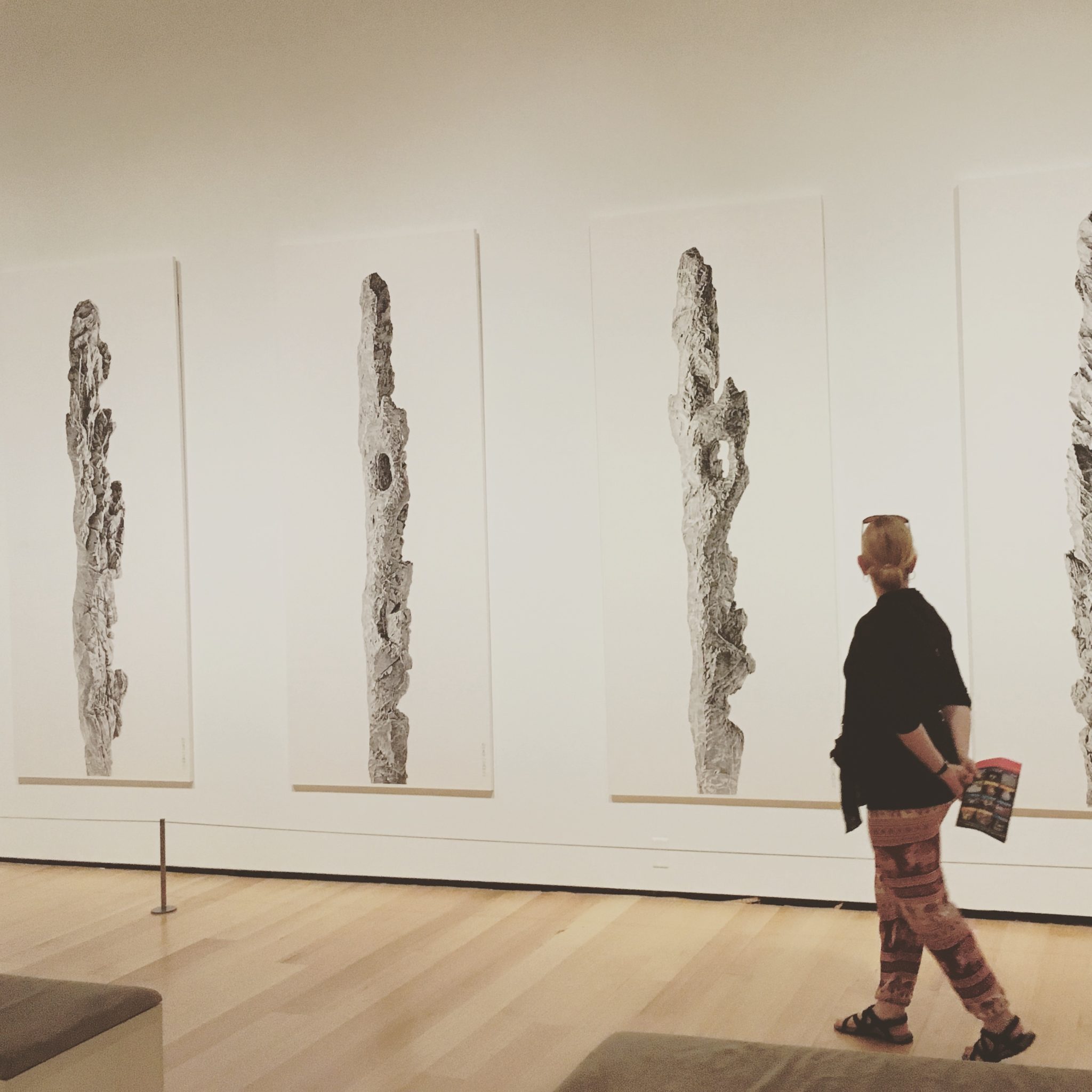