This question came in via email from one of our followers:

Or should the movement be more occurring at the sacroiliac joint?

Reason I asked is it’s not something I’ve heard most professionals speak of but plays a vital part during movement as I find when working with clients and I ask them to walk normally and I say tell me what you feel, 10 out of 10 say their lower back isn’t stable as such and can feel a slightly side to side movement them when I tell them to think of keeping the water in the bowl they them say it feels more stable.

Really would appreciate if you can help me out on this.

Thanks for your question.

OF COURSE the lumbars should be moving from side to side in gait. The power for walking comes from the lumbars, and in humans they move in all three planes of motion – side bending, flexion-extension, and rotation. A good reference for how walking is generated from the lumbar spine is The Spinal Engine, by Serge Gracovetsky.

Let’s defuse the confusion between ‘stable’ and ‘rigid’. Too many who have heard the research on Core Stability have unfortunately re-interpreted this as ‘core rigidity’. If God had wanted core rigidity, She would have continued the bone from the iliac crest to the bottom of the rib cage – problem solved!

In fact and instead, the skeleton gets very narrow through the waist – a slim segmented tentpole, which requires the psoas on one side and the erector spinae on the other to shore it up, with the many layers of the thoracolumbar fascia fanning out to either side to join the abdominals – as in this picture from Grundy. 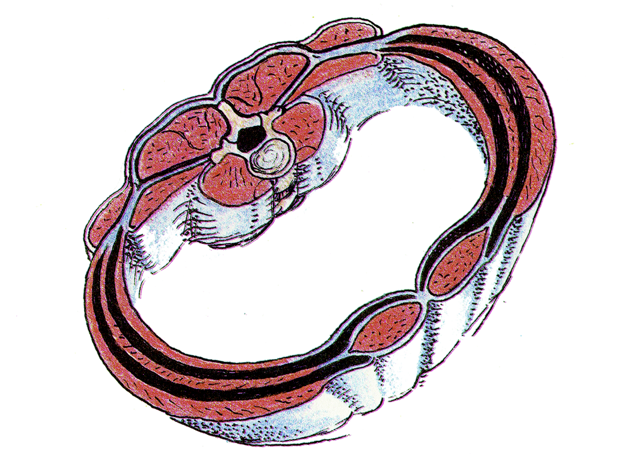 This arrangement shows us that the lumbar spine is designed to move within limits, not to be held rigid.

The pelvic fin that turned into our ‘hind’ leg grew out of the lumbar spine, and the leg bud still emerges from the lumbar area, and the leg starts with the psoas and quadrates lum borum, not at the iliac crest or the hip joint.

So the lumbar spine has moved sideways since yo’ mama’s mama’s mama was a fish, and the side-to-side movement was the primary motivator. In human walking, the main motivating plane is sagittal – flexion/extension – but the side-to-side movement is still essential in accommodating the placement of weight first on one foot, then on the other – transferring the load from side to side, foot to other foot, while the head stays steady.

Human walking also involves rotation, and this rotation is transferred as torque or torsion through the psoas to the lumbar spine, which transfers the twist is communicated through the lumbars (which can’t twist much themselves) into our rib cage, which ticks and rocks like a metronome during relaxed walking.

NO, in answer to your second question, we don’t want to so limit movement in the lumbars that it shifts to the sacroiliac joint. This is a great recipe for a hyper mobile (and painful) SIJ.

Imagine trying to pump a bicycle up a hill without side-to-side movement of the lumbars. Walking doesn’t need that much movement, but it does need a responsive, not a rigid, spine. 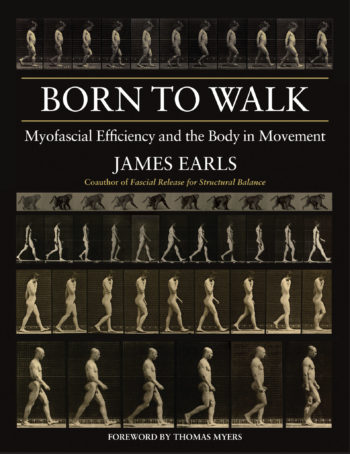 Protected: Born to Walk: Myofascial Efficiency and the Body in Movement – SOLD OUT