I’m sorry I haven’t seen this until now, since it was posted long ago – it’s always a pleasure to enter the lists to joust with Julian. I hear a bit of Gil Hedley in this line of thinking too, another dissection artist with whom it is worth contending.

So – the Anatomy Trains lines are ‘imaginary’? 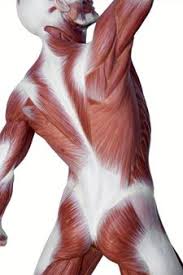 There is much in here to agree with, but I would have thought an experienced dissector like Julian would avoid the trap that says: “You can create a line anywhere by cutting out any continuity of tissue and pulling on it.” This is a common critique of myofascial continuities offered by those who have never been in a lab. It’s true, but it’s a truism – the fascial web is everywhere omnidirectionally capable and will respond by aligning with, and then resisting, any line of pull to which you care to subject it. This is a property of mammals’ particular webbing, and given the random array of forces out there for our body’s come up against, a good evolutionary strategy. But that does not mean that any line cut through the fascia is equal to all lines of dissection.

The Anatomy Trains lines are not cut at random, but follow instead the body’s design. Our dissections distinctly and reliably follow the ‘grain’ of the parietal myofascial fibers, which is in turn shaped by our movement according to Wolffe’s (and Davis’) Law. The fascial system is not a passively draped toga, but a viscoelastic unitard that is constantly pulling in on the skeleton, with or without any muscle tension, with or without myofibroblasts. Cut the fascia profundis, even in a cadaver, and muscle bulges out through the hole. Fascia is constantly acting to restrain the tendency of the tissues beneath it to suck up water and swell outward.

Our patterns of movement create common pathways through the myofascia below the level of the profundis, and the grain of these pathways is readily visible to anyone who reflects the superficial and profundis layers. The 12 myofascial meridians that comprise the Anatomy Trains system are all following that grain. Certain of the connections within the lines I have charted will likely be modified by the next iteration of this concept, or by researchers like Jan Wilke (read one of his abstracts on fascial continuities here.) While I am gratified with the ‘play’ that Anatomy Trains has received, I have little doubt that I did not get it all right on this first outing. But I stand by the coherence of the manner in which they were derived.

Anyone who has followed Jaap van der Wal or Peter Huijing and his group must be impressed with the ability of fascia to distribute forces sideways, (in other words, along the lines of latitude, not along the longitudinal myofascial meridians.) Whether this distribution happens in circles or spirals or puffs is something I leave for more engineering minds than mine. I do note that in a Newtonian universe, tension on tissue moves that sling toward aligning in a straight line, as would any rope or strap. If you hang from a branch, like our arboreal ancestors, you will pull the myofascia – like that continuity coming from the thumb to the pectorals minor and beyond – into a straighter line, and the more load you put on it, the straighter it will try to get. I would submit that most of the sideways force distribution Julian mentions is taking place via the viscous GAGs, your body’s force dampener, less via the collagen fiber net which transfers forces more linearly, but that is presumably an answerable research question.

Similarly, leaning forward puts a near-linear strain down the back of the body, leaning backward gives similar strain to the tissues aligned – they are aligned, let me show you – along the front of the body. Etc. These lines may be ‘imaginary’ in any given resting posture, but they are real enough when common recurring loads are applied.

P.S.: ‘What-about-ism’: On the other side, just how ‘imaginary’ is the old model of muscles as individual actuators? This model is being challenged now at the highest levels of anatomy, showing up in Gray’s, as Jaap recently pointed out. Defining individual muscles in terms of origin and insertion is another artefact of dissection, and has been the ‘religion’ of every physiotherapist, trainer, and bodyworker (including me, in spite of trying to get my brain beyond it for three decades) for the last several hundred years.

The idea of having ‘600 muscles’ is an old and very pervasive act of imagination. 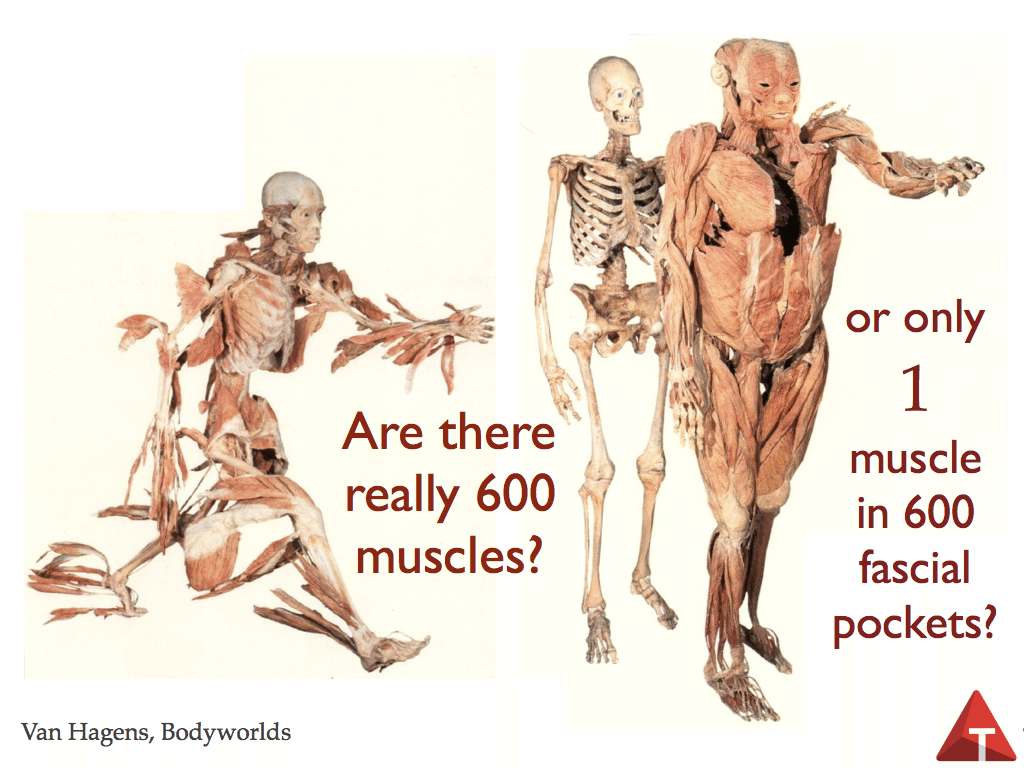 The idea of having only one muscle – one mind, one muscle, just arrayed in 600 pockets in our fascial suit – is probably more accurate, but not very helpful in knowing what to do next. The map of the lines – and it is very clearly defined as a map, not the lived territory – is an intermediate way of organising our thinking somewhere between the blatantly reductive ‘single-muscle theory’, and the New Age nebulous ‘It’s all one muscle and we work through individual neuromotor units anyway, not whole muscles.” Reading the body in terms of the lines yields insights into where to start, what are the components involved, and when to know that you are finished.

That the Anatomy Trains system is incomplete, or requires modification in light of further research, I will readily accept. The idea that it might become a religion is laughable – this from its chief prophet. Maybe it will after I leave, but that is the fate of all truths – to start as heresies and end as superstitions. Ideas like ‘knots’ and ‘trigger points’ and ‘drinking 8 glasses of water a day’ (who does that?) have similar trajectories.

If some few people are going around ‘believing’ in Anatomy Trains, that’s unfortunate. But that does not provide a sufficient counterweight to the practitioners who have simply used the map for insights into connected patterns in human ‘acture’. These folks come up with inventive strategies for relieving the restrictive parts of those patterns – which can be held in distant points along the lines, not necessarily where the presenting problem lies – using the Anatomy Trains map as a guide. 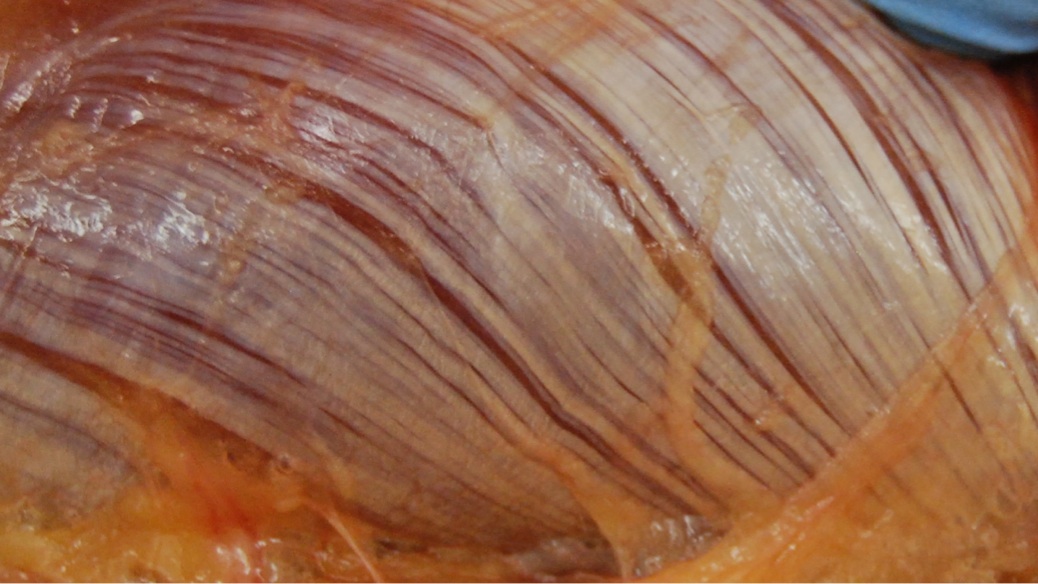 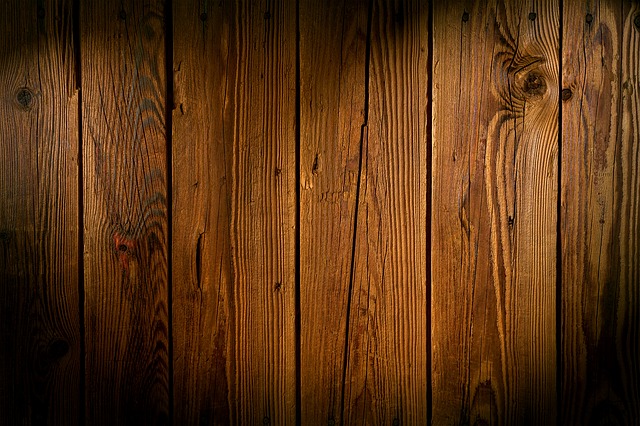 Seriously, we are planning to document the lines in dissection again in the next couple of years, and would love to have your objections as clearly as possible so that we can either meet them, or tug our forelock in recognition of your insights. We cannot learn less, we are always learning more.