When we are working in the myofascia, we are often looking for muscular events – trigger points, hypertonicity, hypotonicity, and ‘knots’ in general. When we focus particularly on the fascial structure, our appreciation must shift toward the fascial fabric itself, instead of the fascial fabric spun more loosely within the muscle. Try this exercise to feel the difference.

We all work with hamstrings. Play a bit with your model’s hamstrings, so you have a sense of the muscle and fascia together, and I’m betting that no matter who your model is, you will find examples of most muscle ills within a set of hamstrings. Now hamstrings are a fairly high percentage of tendons and membranes and fascial bits – so you are really feeling both, of course. 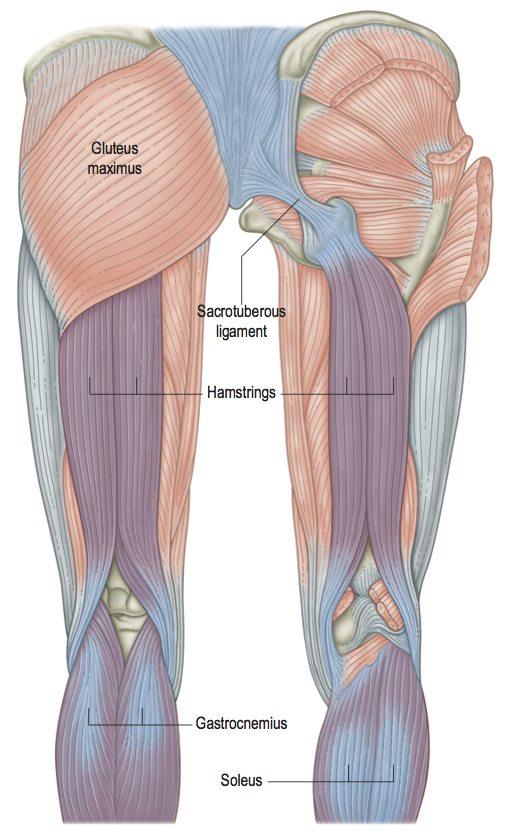 Compare that ‘feel’ to the following technique:
With the client prone, palpate just above the knee, where the two medial hamstring tendons are several centimeters from the lateral tendon of the biceps. From the space between, just above the popliteal fossa, palpate upward toward the ischial tuberosity. As you move superiorly, the gap between the medial and lateral hamstrings will narrow to a valley, and then disappear altogether. But where does this happen?

Try it on several people to appreciate the differences – some people’s medial and lateral hamstrings join much closer to the knee; other closer to the hip. There may be some genetic aspect to this, but mostly it is usage that determines how able the hamstrings are to glide on each other. The more stuck, and the lower the ‘seam’, the less differential movement you can have between inner and outer – which is a good idea if you are a slalom skier or a soccer player, and not so necessary (or commonly present) on a runner or a champion sitter. Chronic sitting really knits those hamstrings together. 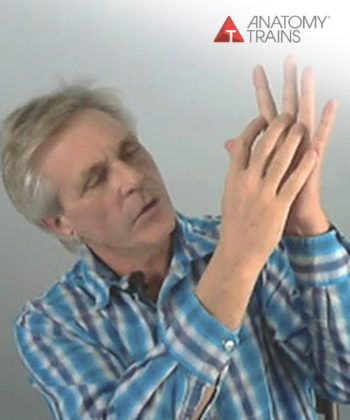 The Fascial Release Technique video series is 6 hours of direct instruction in myofascial and fascial technique from Anatomy Trains author Tom Myers. Ease postural compensations and restore natural myofascial balance. Tom Myers has been honing these techniques over many years of teaching worldwide to many different professions. Direct from our ‘practice studio’ to you, this… Read more

Put your fingertips in between the medial and lateral hamstrings somewhere where the ‘valley’ between them starts to close, and insinuating your fingers in between, get them to bend the knee to 90 degrees and turn the foot strongly in, then out, pointing their toes as far in each direction as they can. You will feel the muscles contracting first on your fingernails, then on your finger pads as the hamstrings alternate turning the lower leg.

Let your fingers sink down into the space between, opening it and sinking progressively down toward the femur. Now you are in pure fascia, and it does not matter if the muscle is contracted or not – you are working the septum in between, dissolving Gil Hedley’s ‘fuzz’ and reducing Antonio Stecco’s ‘densification’ – but you are not on trigger points, knots, or anything muscular.

Mind you, I am not advocating one form of treatment over another – both myofascial work and fascial work are important. I just invite you to appreciate the unique quality of the fascial fabric. We usually present techniques in terms of muscle names – but we really mean the ‘muscle as zip code’ – the muscle and all the fascia that sails with her. In some places – like this intermuscular septum or the thoracolumbar fascia or the lateral raphé – we are working in the fascial fabric alone.