Continuing our series on key anatomy pictures, these two specimens from BodyWorlds – KorperWelten – so epitomize the difference in approach between Newtonian and Einsteinium biomechanics. 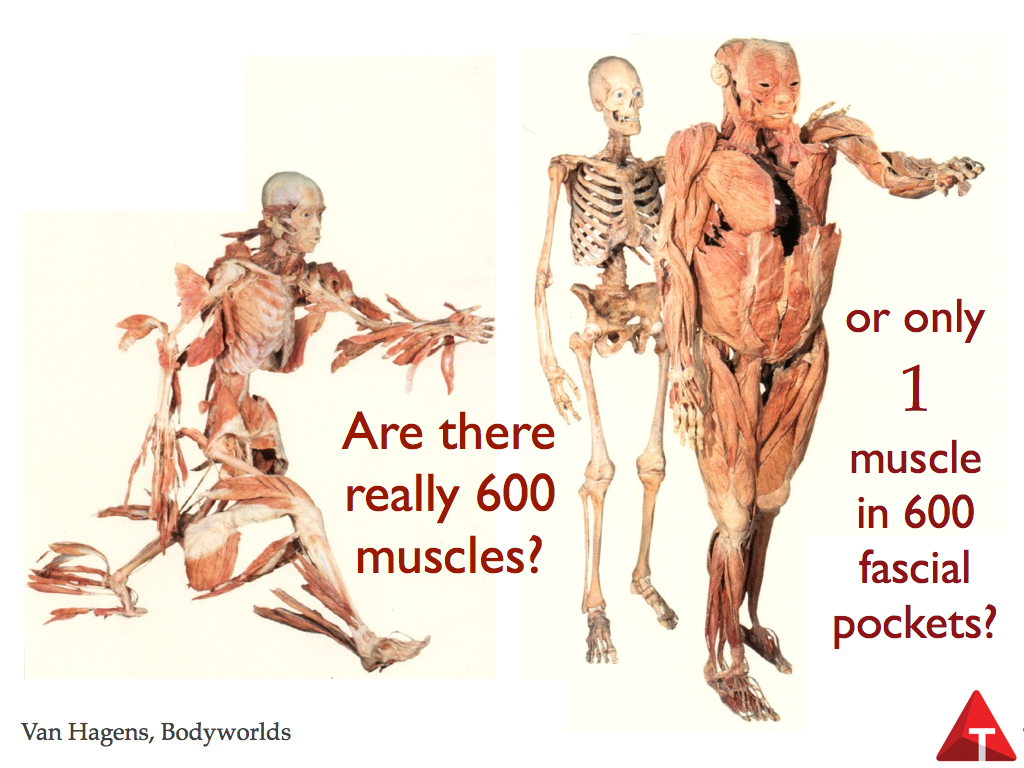 The left hand picture shows the individual muscles, detached at the proximal end and reflected before being plastinated. But the message is unmistakable: If we understood the actions of each of these muscles, then we could understand the biomechanics of – in this case – running. How’s that working’ out for ya? Two hundred years of this kind of kinesiology, and gait is still widely misunderstood via this model. Despite its power – which is undeniable and positive compared to ignorance – but what it leaves out is just massive – the actions of muscles up and down the lines, the actions of muscles on their neighbors, and the actions of muscles into the ligaments. It’s not wrong – we’ve learned a lot from this model, but now we need something more inclusive. (Join us in our 2017 Dissection workshop).

The picture on the right is closer to what we are proposing. In this picture the entire ‘myofascialature’ has been removed from the skeleton. Van Hagens is a bit of a wag – and takes substantial heat for his whims – and put glass eyes in the skeleton, which animates the skeleton. I have seen this piece – the muscles look lifeless, dead-eyed, while the ‘seeing’ skeleton gets our sympathy. They are in the same position – see the skeletal fingers up by the shoulder? Seen, this piece is arranged so the skeleton seems to be saying, “Hey, wait – I can’t move without you!” while the muscles seem to be saying “I’m outta here”. Both pictures are ‘false’ in that so much has been removed – as denizens of the dissections know, I am forever repeating that the act of exposing one thing obscures something else. (link to dissection video) But what you can see in this second piece is the continuities in the muscles, the fabric ‘grain’ connections which make the difference between the Anatomy Trains and other connections just carved out of a dissection or conceived of in someone’s mind.

Also in this piece you can see one of the organizing principles I delineated in Chapter 1 of the Anatomy Trains book in the section about Embryology – imagine that we wrapped that skeleton in cling wrap. Around the bones it would be the periosteum and the joint capsules, thickened with ligaments. Now wrap all the muscles in a big fascial wrap – it would be the epimysium and the fascia profundis layers. Tack the outer layer down onto the layer wrapped around the skeleton, and you have a better picture of muscle attachments – not end points, as in the left-hand picture, but simply places where the outer bag tacks down to the inner bag, facilitating powerful movement.

Van Hagens, despite the many difficulties that have been heaped upon him, is one of my heroes, boldly showing us ourselves in a way that is both artistically satisfying and scientifically astounding.