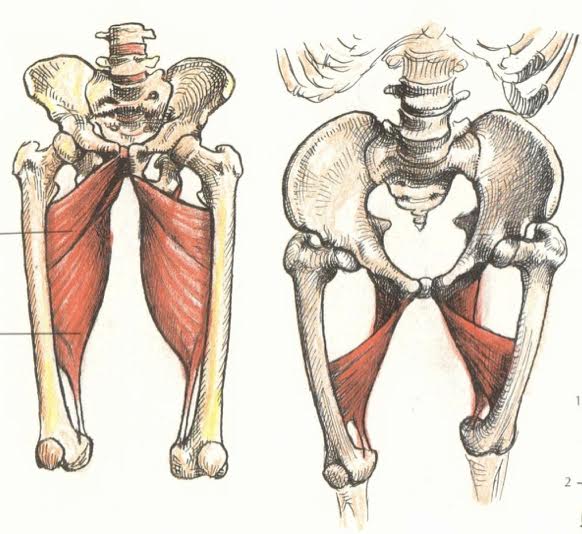 Anatomy nerds like me revel in old anatomy books that give you perspective not provided by most modern texts, which have seemingly settled on a particular 2-D point-de-vu about muscle function. This more 3-D one from John Hull Grundy (don’t ask, long out of print, if you can find a copy for under $400, I’ll buy it) whose unique approach makes him a delight and a source of new insight.

One of my favorite muscles (ok, fascia freaks, ‘myofascial unit’) of the moment is adductor magnus. What’s it doing there? Chickens, horses, and bats all get away with having scrawny adductors, but yours fill a generous triangular prism on the inside of your thigh. But we don’t actively adduct a lot, do we? Unless you’re a bull rider, an equestrian, or a member of the world’s oldest profession, what do we need these large and muscular adductors for?

This picture helps answer that question. On the right leg of the picture on the left, you have adductor longus included, going up the pubic bone, but all the rest is just adductor magnus, and I invite you to notice a couple of things that Grundy shows us in these two pictures:

1) Adductor magnus is a twisted sister.

See on the right how adductor magnus has a curved sweep, almost like a the sail on a boat? This twist is rarely seen in two-dimensional anatomy texts, but it is crucial to understanding this balancing muscle’s function. This twist is the result of the medial rotation of the femur in foetal development. Our legs start out growing to the side, like a fish fin or an alligator leg, and rotate inward during development, and turn further inward as we stand and walk. Look at how the ligaments are on the hip and you’ll see the same twist.

The twist in the adductor magnus allows it to be a major stabilizer of the pelvis. Let’s say you bend down to pick up your child (or a bag of groceries, whichever needs tending to first), the large muscles on the front, side, and back of your pelvis are doing the major work – while adductor magnus prevents the synergistic actions of these muscles that would throw you off balance. It is uniquely positioned to put the damper on flexion or extension, medial or lateral rotation, side-to-side sway, and, of course, abduction.

Adductor magnus is in a central position. It’s squarish shape and its twisted nature makes it a major pelvic stabilizer – one many therapists and trainers ignore. 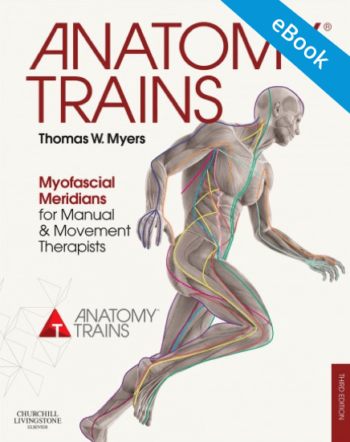 a) The uppermost part (sometimes named adductor minimus – even though there is no real fascial separation from the rest of the muscle, this upper part is innervated by the obturator nerve, the rest of it by the sciatic) runs from somewhat forward on the pubic part of the ramus down and back to the linea aspera of the femur. This configuration makes this part an anterior tilter of the pelvis (hip flexor), and a lateral rotator (or, as implied above, a resistor of medial rotation and posterior pelvic tilt). 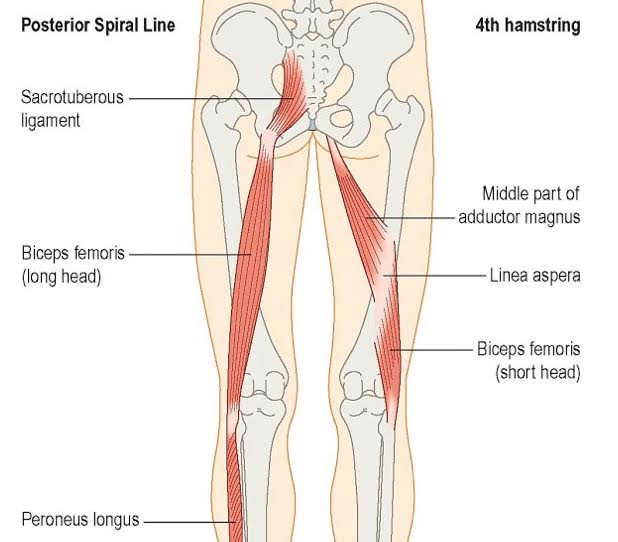 c) The longest part of adductor magnus is also like a ‘one-joint hamstring’, but that is the hardest part to see clearly here in these front views. As you can see in this view from the rear (again, from Anatomy Trains), that longest part is again almost a separate muscle, with fibers going straight down from the ischial tuberosity like the hamstrings, but fastening firmly into the medial epicondyle of the femur you can feel just above the inside of your knee. This part of adductor magnus definitely keeps the pelvis and the upper body from falling forward – and as a muscle crossing only the hip, can do so much more efficiently the the the 2-jointed hamstrings. 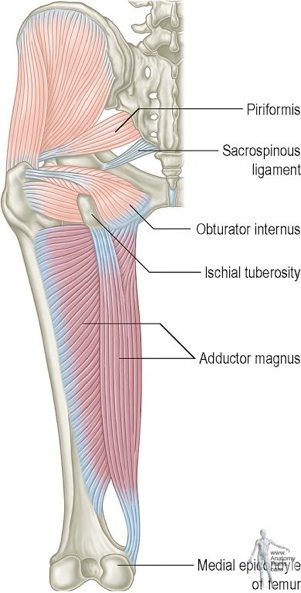 Long story short: we should use this adductor as a stabilizer, and the hamstrings as motivators, but for far too many people, the hamstrings get appropriated as postural stabilizers, and are therefore waaaaay too short.

Now, you could look all this up in a second if only you had the e-book edition of Anatomy Trains or you can get the full video of some techniques for it here.