I had to turn to at 5 to get out of Beijing before the traffic. The closest point is 2 hours north, and my host’s partner Miss Bei drove David and I up in the dark. After a soporific ride out through the worsening ‘weather’ (pollution), it was still dark when we arrived and just getting light when we hiked up to the main gate. 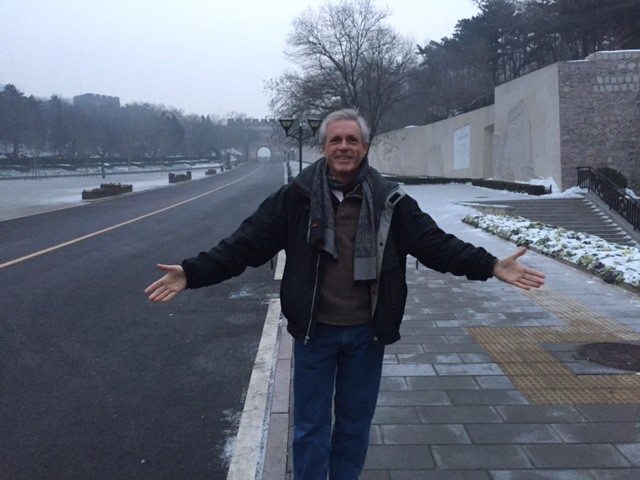 David –  assisting me, from Singapore – was as covered as any Bedouin woman, with only his eyes showing. I was more lightly dressed, but still glad to be armed with a cup of sugary Nescafe and cocoa they call ‘cappuccino’ – at least it was hot and wet. This is a top tourist spot, and the tours – all Chinese at this hour – were starting to arrive as we were first through the gate, and took off to the south side, away from the crowds. 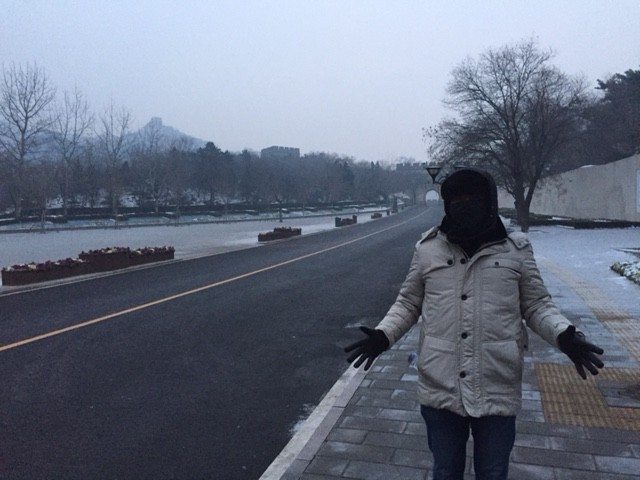 I was still armed also with the urban myth that you can see it from space, which is not true. Seeing it from the ground, however, is more than impressive. It was one of the foggy winter days – you can get them in Maine – so there was little contract for photos of the winding road disappearing over the ridges and reappearing in the distance. But being there, climbing it, seeing the mountain falling away to either side as you peer down through the battlements – it certainly would have been daunting to any army before one that had howitzers. 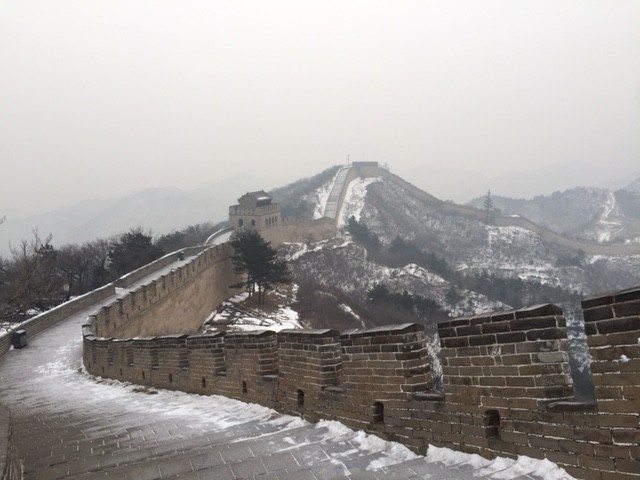 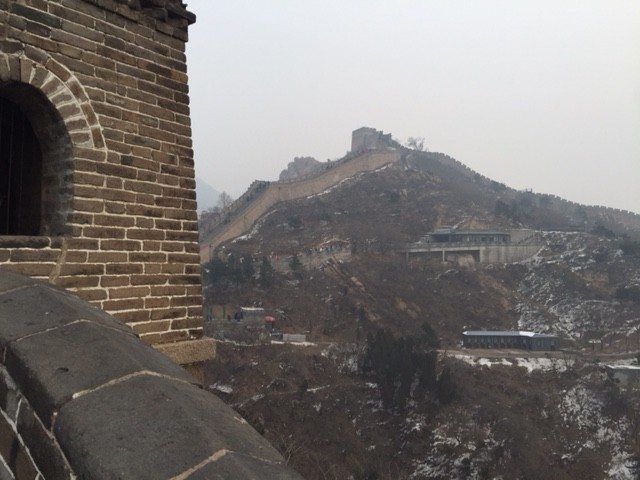 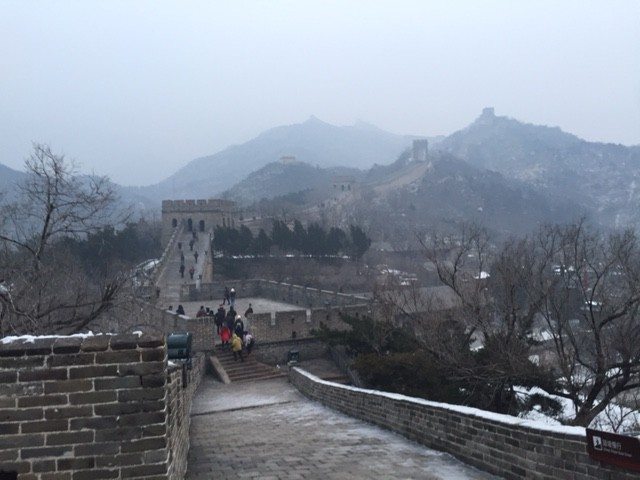 Within a few minutes of climbing we had snow, ice, and very slippery hoarfrost underfoot. David – suffering more in his lungs than I have been from the pollution, and the cold bothers him too – gave up after the first tower. My running shoes are slippery, and there were some sections I had to pull myself along using the metal handrail because the paving stones were so old and smooth, there was wind. The steepest slopes were stepped, but the unstepped ones were pretty sharply angled. 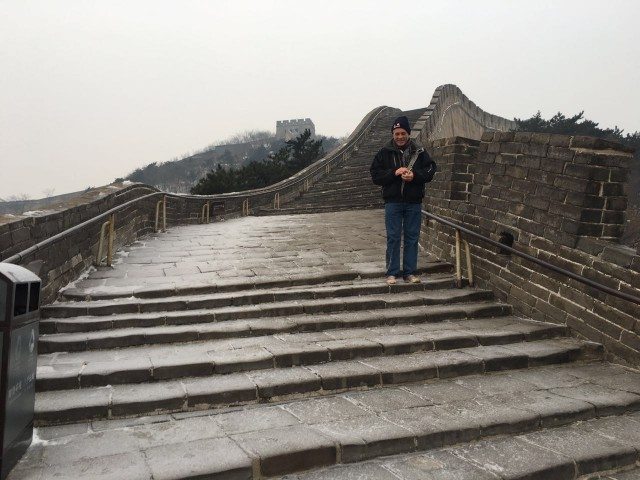 This thing was started 2000 years ago, and by the 1Ming Dynasty in the 400’s – before Columbus first set out – covered around 6000 km, or 4000 miles. You’ve seen pictures – it’s about 20 – 25’ wide, and winds along the very ridges of complex little mountains, taking such a sinuous course that one thinks, “Surely they could have just cut across from here there and saved so much time!” but neither time nor manpower had the value they have today – thousands died building this wall.

And small wonder – perched at the peak, the very watershed, how did they keep the workers in food and water? The support team required to build such a wall, with watchtowers every 500 – 1000 yards or so, being supplied from the valley below, boggles the mind.

Of course the part in my photos has been restored extensively recently by Chairman Mao and the People’s Republic, so it retains an old character but is clearly not itself ancient. The parts that are older and in their original condition are broken down and – like Stonehenge – parts had been hauled off by farmers as foundations for barns and whatnot.

Once at the top I went for a morning run across the ridge to this temple-like watchtower. The signs say ‘Do Not Use Cellphones During Thunderstorms” and ‘Create No Nuisance’. On my way back down the slopes I lost my footing and just slid down the paving stones on my side hip for about 50 feet until I could stop on a little drainage trench. Glad I didn’t hurt myself because no one was up there, but if fact it was a fun ride. Except for my hotel room, this is the first time I have been alone since I got here, certainly outside alone. The sun was now up fully, but just a moon-like ball, whether from pollution way up here or just regular fog I don’t know. 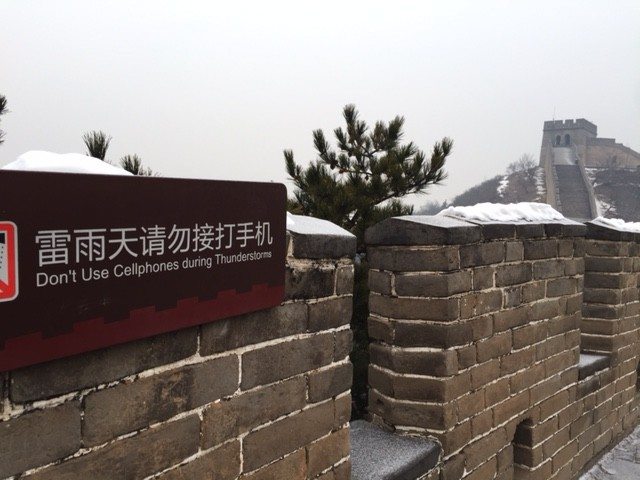 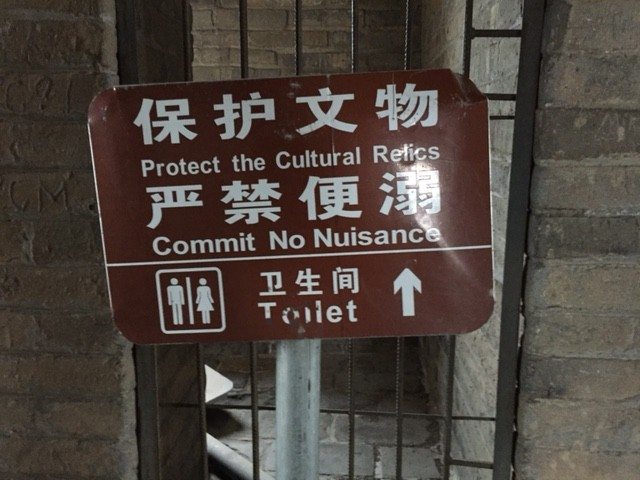 I crossed over to the more touristy side and did a run up that side, passing lovers doing selfies and a group of older women in what was familiar to me as Tibetan dress, but whether they were actually from Tibet or some other place I don’t know. 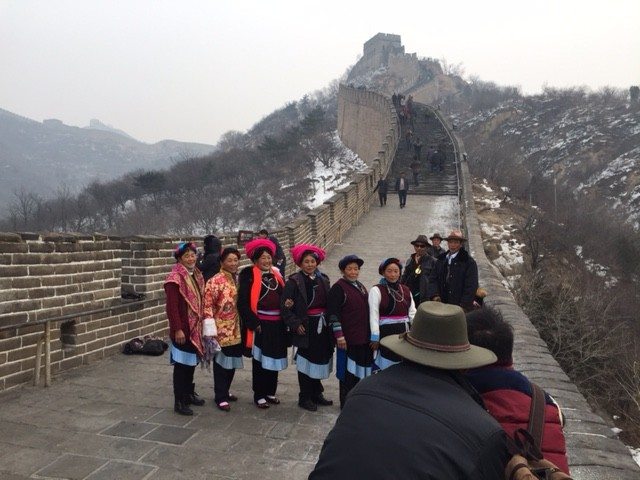 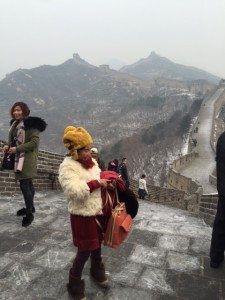 I jogged back down from the highest tower I could reach – time to descend again into the smog, catch the plane to Shenyang, and begin the KMI.