Beijing has the Forbidden City at its center, but you could call the whole thing ‘the Forbidding City’.  Usually when I am not working or sleeping, I love roaming in foreign climes, but Beijing is not friendly to the pedestrian.  Wide boulevards that would be great with a river in the middle and cafés along the edge are instead full of languidly flowing rivers of cars with grimy sidewalks grudgingly ceded to the few pedestrians.

(‘Languid’, however, does not apply to the drivers of those cars who press constantly for advantage, between lanes, along edges, interweaving with pedicabs and small lorries.  But unlike other places, it is rarely a standstill and never at speed.)

The central palace is surrounded by 8 ring roads – Beijing goes on endlessly in square block layout, like NYC or Phoenix, punctuated with the rings.  Endless describes so many Asian cities now.  It is the New York and Washington of China, and cranes top the buildings as the construction continues apace.  After the first two days of relative clear, today we have bad ‘weather’.  This is how the Beijing-ers refer to the pollution – ‘The weather is good today’.  Even when the weather is good, it’s a good deal worse than NYC or LA in the 1970’s, which was bad enough for those of us who remember. 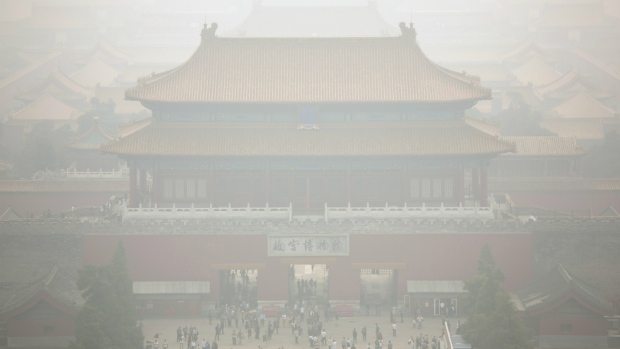 It’s Sunday morning, but the ‘weather’ is very bad today.  Everyone at breakfast at the Hilton was hacking, snorting, and coughing.  It’s a Chinese habit anyway, but this morning I almost could not eat for the sounds of moving mucous.  Even on Sunday the traffic arteries are clogged on our way to class, and the sun, even though it’s well up, is an elongated red ball.  You can feel it in your eyes (red) and in your throat (raw), and everyone’s skin has a cast of gray. 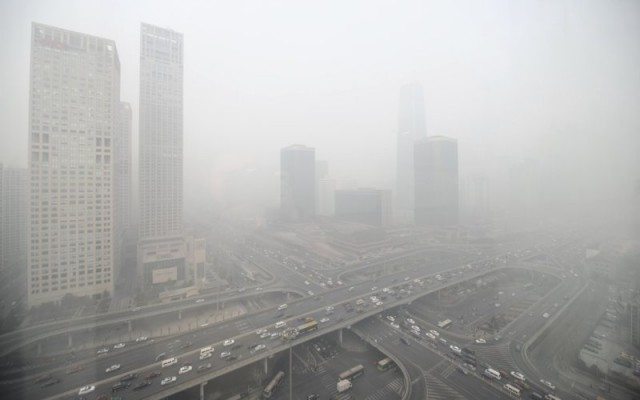 There is no use complaining about it; it’s a fact of life.  So they call it the ‘weather’.  In ten years they will have cleaned it up – they’ll have to, the recent spate of bad pollution almost cost the mayor of Beijing his job, because he promised improvement.  Instead, they just keep the alert at ‘orange’, because a ‘red’ reading would require emergency action – and that would cost money.

Watching kids ride their bikes and walk to school in this fug makes me sad for them.  We’re burning up the fossils as fast as we can.  Those kids will inherit the heat, the soot, and the ill health, while we burn bituminous coal inefficiently to first heat the hotel and then to power the air conditioner they installed in my room to cool it down enough to sleep.  Madness.

The amount of wastage here – as if anyone from the US should talk! – but at the nightly banquets that I cannot escape, we leave so much food circling the lazy susan as we finally finish the last toast and arise from our gilded chairs to leave.  I would like to follow the food out to the kitchen and see whether it gets distributed to the poor or at least the employees, but I imagine it just getting thrown into the general smell of the place.

Everyone is so sincere, and everyone is trying very hard – it’s endearing and hard to resist.  And they’re strategic thinkers, the best playing the long game.  But it is also a society that eats everything.