I’m always happy when my hotel windows open, which is increasingly rare in the States.  I suppose it’s because someone could jump, and that’s bad for one’s reputation, but I feel more suicidal when forced to breathe recirculated air all night.  Fortunately in Hamburg I have one of those marvelous German windows (why don’t we have them?) that with a twist of the handle either swings wide or tips open a bit from the top.  I opt for swings wide, and since it is just above freezing here, I also ask for another comforter, to which I get the slightly disdainful sounding ‘of coss’ from the chambermaid.  Everyone here disclaims their English, but they all speak it.

In the dark of dawn, however, the S-bahn trams started screeching their way around the corners – a typical German city sound, but a rude awakening, so I stumbled across to close it.  Looks like another gray day, as common in Hamburg as in London.  No one here looks up.
But I don’t feel gray at all – I am looking forward to working with the great Edo Hemar, trainer extraordinaire, whom I met through Robert’s Fascial Fitness program.  Now, Edo really doesn’t have as much English as the chambermaid, but he has tons of soul.  Like Ian O’Dwyer, giving him a hug is like hugging a tree – his bark is rough (a difficult watchful raptor’s face, with a set jaw and a turned-down mouth), his core is oak-strong, but between the two flows a xylem and phloem of warmth and deep caring.  And you sense his roots, going deep into the floor of his extensive and attentive experience.
I bet some people are put off by his looks – steely hair in exact placement, stern cut of his mouth, owl-like black eyes, the mien of a man who has known pain.  I’ve never seen his work or how he trains, but I would sign up with him in a minute – he inspires that confidence of one who does not need your business, but knows his own, and looks on you with such serious kindness that you cannot help but be taken in and held.
A little bromance, Tom?  Maybe – but finding real genuine people willing to suffer for the art of teaching is rare. Edo is such a one. 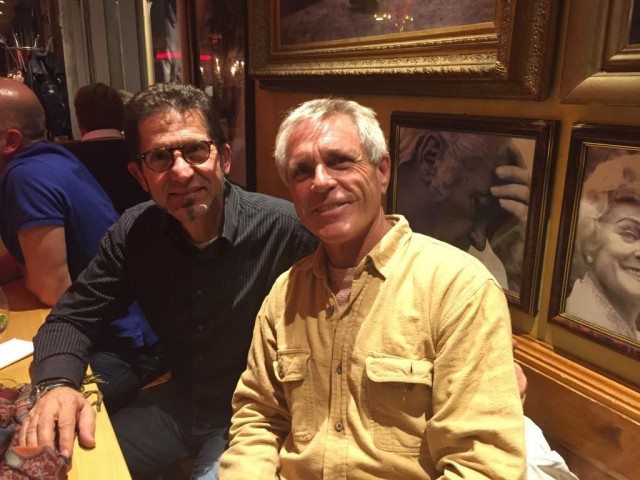 Tom with Edo. After a long day and one of those strong German beers.