I am not much of a New Ager, at least not as much as a lot of the folks around me. I have experience with auras (did you hear that we are all surrounded by an ‘aura’ of trillions of bacteria, skin cell parts, and fecal matter? helluva aura!) because I can feel and occasionally see them, especially while working. But a lot of things people talk about ‘energy’ and psychic perceptions just blow right by me. That notwithstanding, I was pretty damned impressed with the energy that grabbed me during the full eclipse of the moon last night. 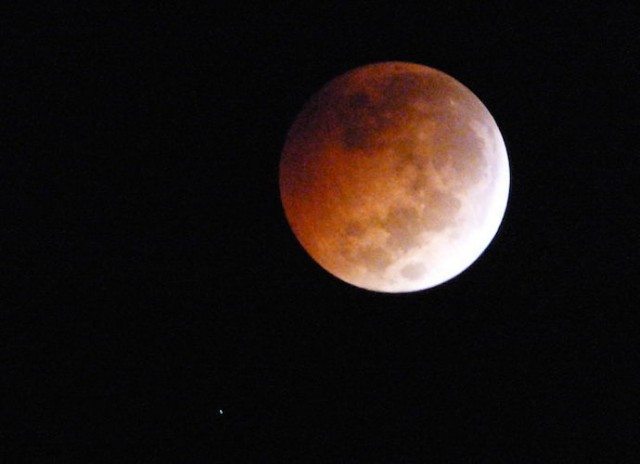 As the earth’s shadow started to eat the moon, Annie and I went down to the pier, to see it all reflected in the water. I got the binoculars from the boat and we sat in the wind, the trees groaning, the water dancing. As the last of the sun’s light was obscured and the moon glowed red, it was like a tremendous surge of weight running through me – I felt as if I weighed 250 pounds, my legs were hard to move, and my equilibrium in my inner ear was disturbed. It happened three times, when the moon went dark, right in the middle, and just as the light broke through on the other side.

Each time the surge would come through like a wind coming from the sun toward the moon, and I would be dragged into the heaviness like an undertow. It would last a few minutes, and then it would pass like an exhalation, letting my body go and lengthen again. I was not inebriated, Annie felt it too, and the center moment woke Quan up out of her sound sleep.

The idea that tiny planets influence our lives – a la astrology – is hard for me to swallow, as much as I absolutely understand the study of cycles. But what does Saturn have to do with my saturnine nature? However, in this case, I’m a feeler, and feeling is believing.