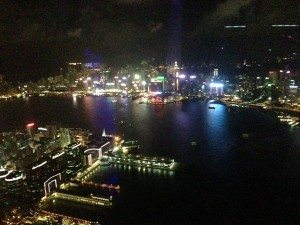 Last night was ‘go out with the sponsor’ night in Hong Kong, and since Kevin and Phoebe are both very down-to-earth folks, it was a bit uncharacteristic for all of us to go the very trendy bar at the top of the new ISA building. With the boys in their jeans and Phoebe in her T-shirt and backpack, we were a bit out of place in ‘Ozone’, with its techno beat, angular architecture, and a straight flush of suits combining ex-pats with the nouveau riche over from the mainland come to spend, spend, spend.

Their friend Stephanie made us feel right at home though, giving us a table with a fabulous view. Hard to believe this picture isn’t from an airplane; the building is higher than the World Trade Center and my ears were popping as we ascended in the claustrophobic black-stone-and-mirrors lift. All traces of the Tai-fun are gone, and that’s my hotel, right there by the triangle of light center left. The sea of light is Hong Kong itself, with the ferries plying Victoria Harbor in between. There is a tunnel but no bridges – American aircraft carriers pass through this harbor.

The blackberry mojito was delicious, and though I didn’t follow the Asian tradition of photographing the food, it would have been worth it: little waffle cones filled with sushi, pesto-coated calimari, and smoked salmon that arrived under a glass bowl whipped away by the waiter to leave an enticing little puff of applewood smoke floating under our noses. It was tough, but we made the best of it, swapping stories of Nepal and Thailand.

Kevin and I are both from small fishing villages – he about an hour from Halifax in the Maritimes – who considered the path laid out by our parents: marry, have children, settle down – and said, “Hell no!” and left to have experiences like these. I ended up moving back, but still escape the small-town pettiness with my frequent trips abroad, and he ended up in this teeming heap of people, escaping to tiny islands in Thailand and the like where he can rent a house on stilts for $5 a night and fall out of the balcony into the aqua sea.

Here’s a ‘quiet moment’ on the streets of HK next to my hotel: 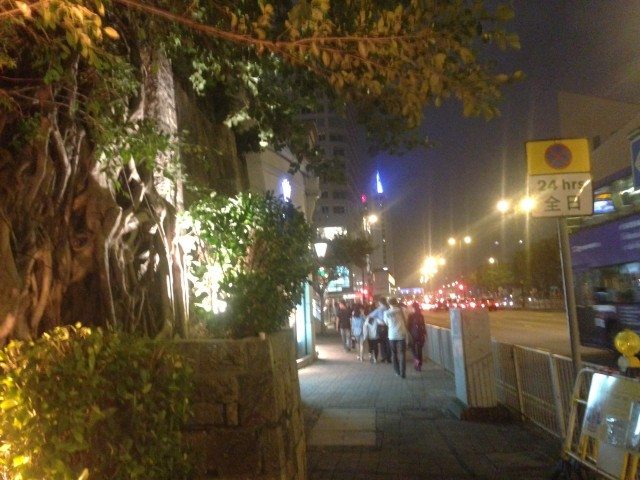