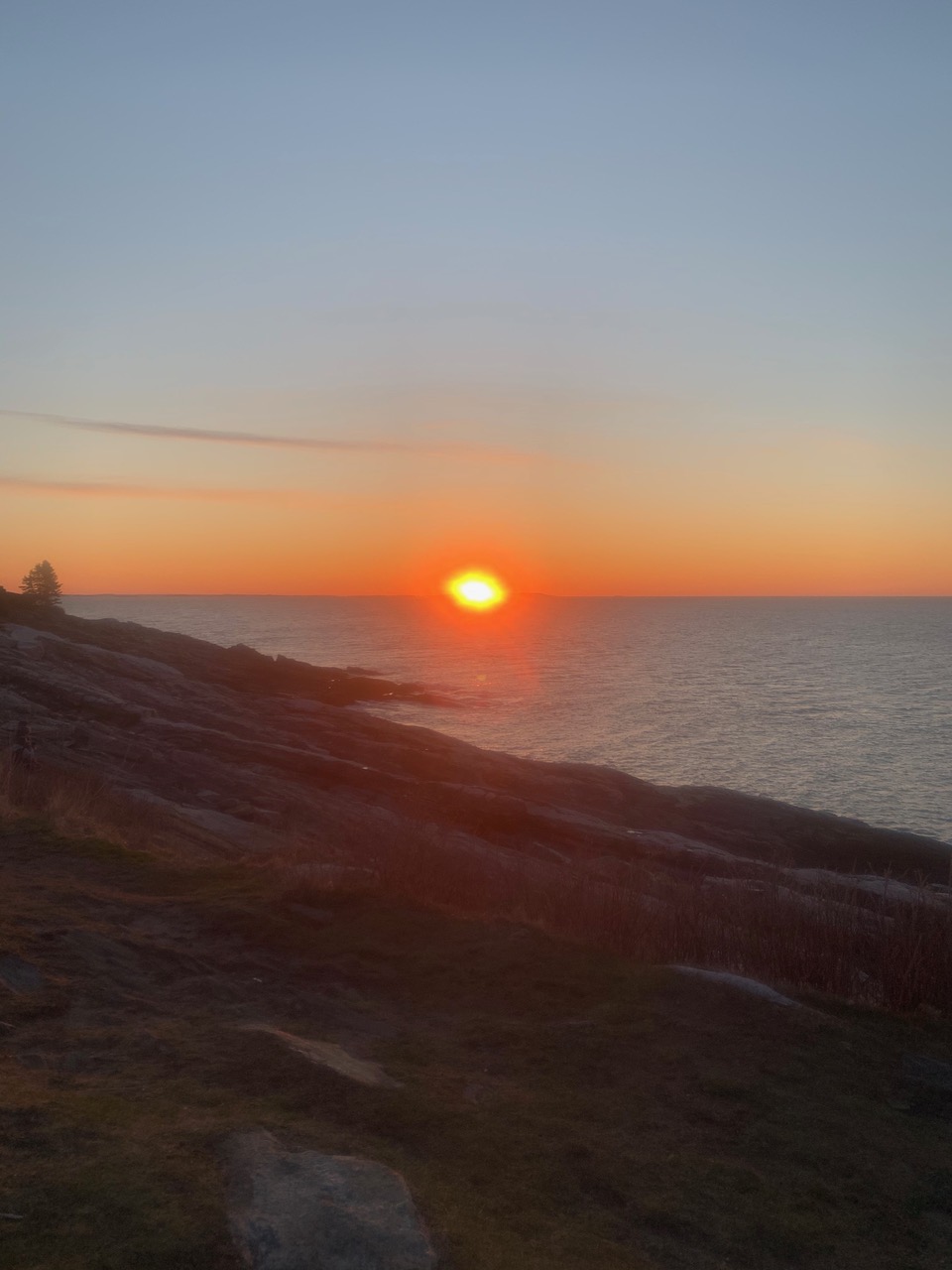 Those of you who know me will be aware that I am not much of a church-going man. Oh, I am all in favour of spirit – practice and discipline, serving the community and the wonderful music – but organised religion has a lot to answer for, IMHO. Particularly the patriarchal Children of Abraham – Islam, Judaism, and Christianity, though Hindus, Buddhists, and Zoroastrians have all had their less-than-shining moments. And New Age spirituality displays uncomfortable similarities to the ’natural’ movement that accompanied the rise of fascism in the 30’s.

While not blind to the consolations of faith and the values religion instills, I find all talk of an afterlife – be it Baptist hellfire, eternal Shanti, or reincarnation – to be a somewhat desperate, fantastical, and unfounded attempt to stave off the finality of death. I need no consoling on that point – I’ve accepted it. It simply requires my religion to hone my focusing skills – now, on this earth.

Living fully is the only sane answer to mortality. This reveals me as a spiritual technocrat: Whatever works. Chanting, singing, meditating, confessing, serving – I have lifted the techniques of religion to help me and others escape from maya – illusions and projections. Whatever works to move people along in their development, I’m for that. The problem comes when the religious observance degrades into ‘spiritual avoidance’ – which you can find eventually in every organised religion from the dark mists of Babylon.

So it may come as some surprise that part of what moves me along is that every Easter when I am not travelling, I go to the sunrise Christian service at Pemaquid. It involves getting up in the dark, pulling on your warmies, stuffing some money in your pocket for the offering, and driving the winding road in the dark to join a few dozen other lumpy silhouettes against an orange sky. The sun bursts gloriously over the ocean’s line next to the dark mound of Monhegan Island as the pastor calls us in. 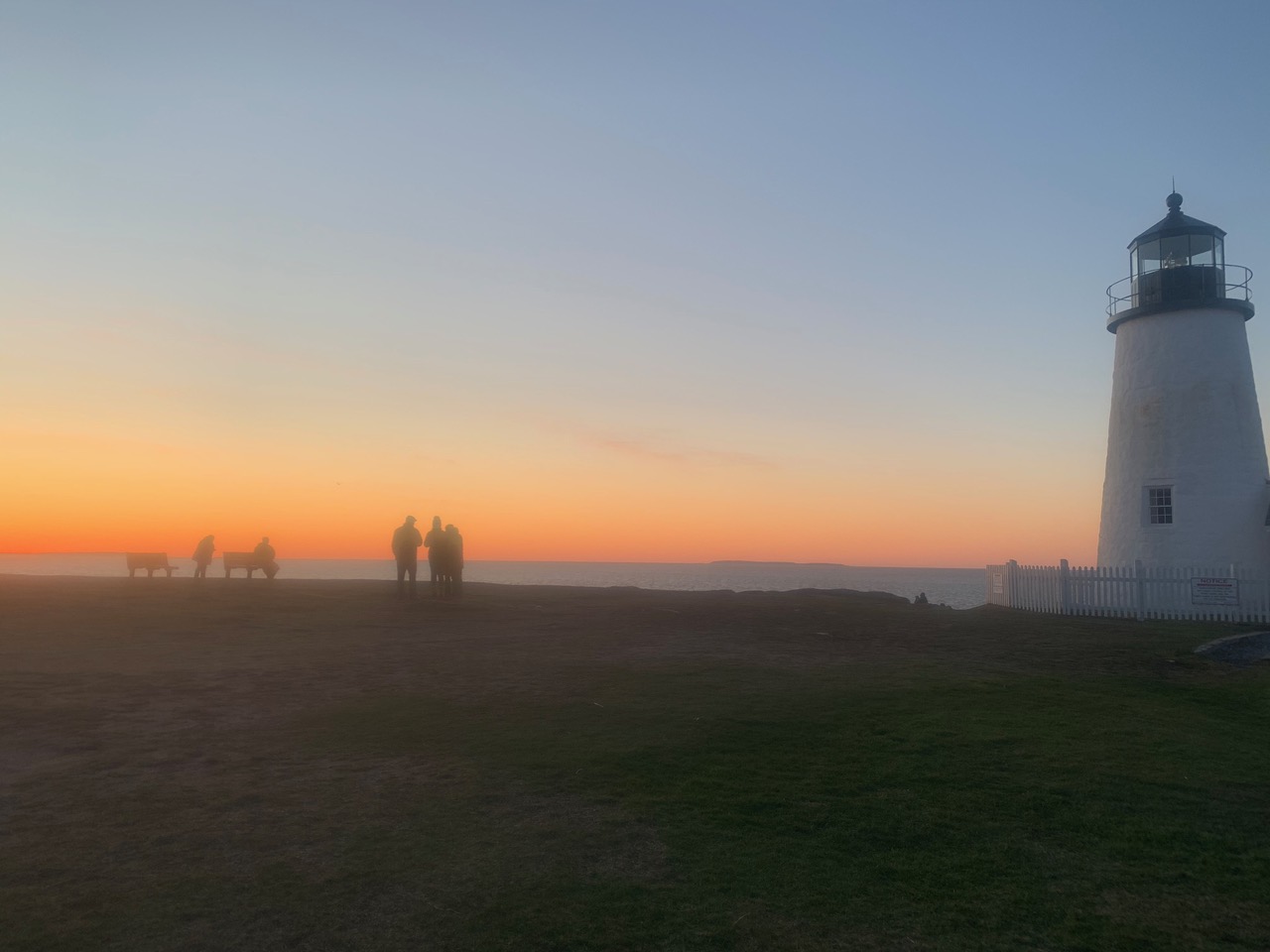 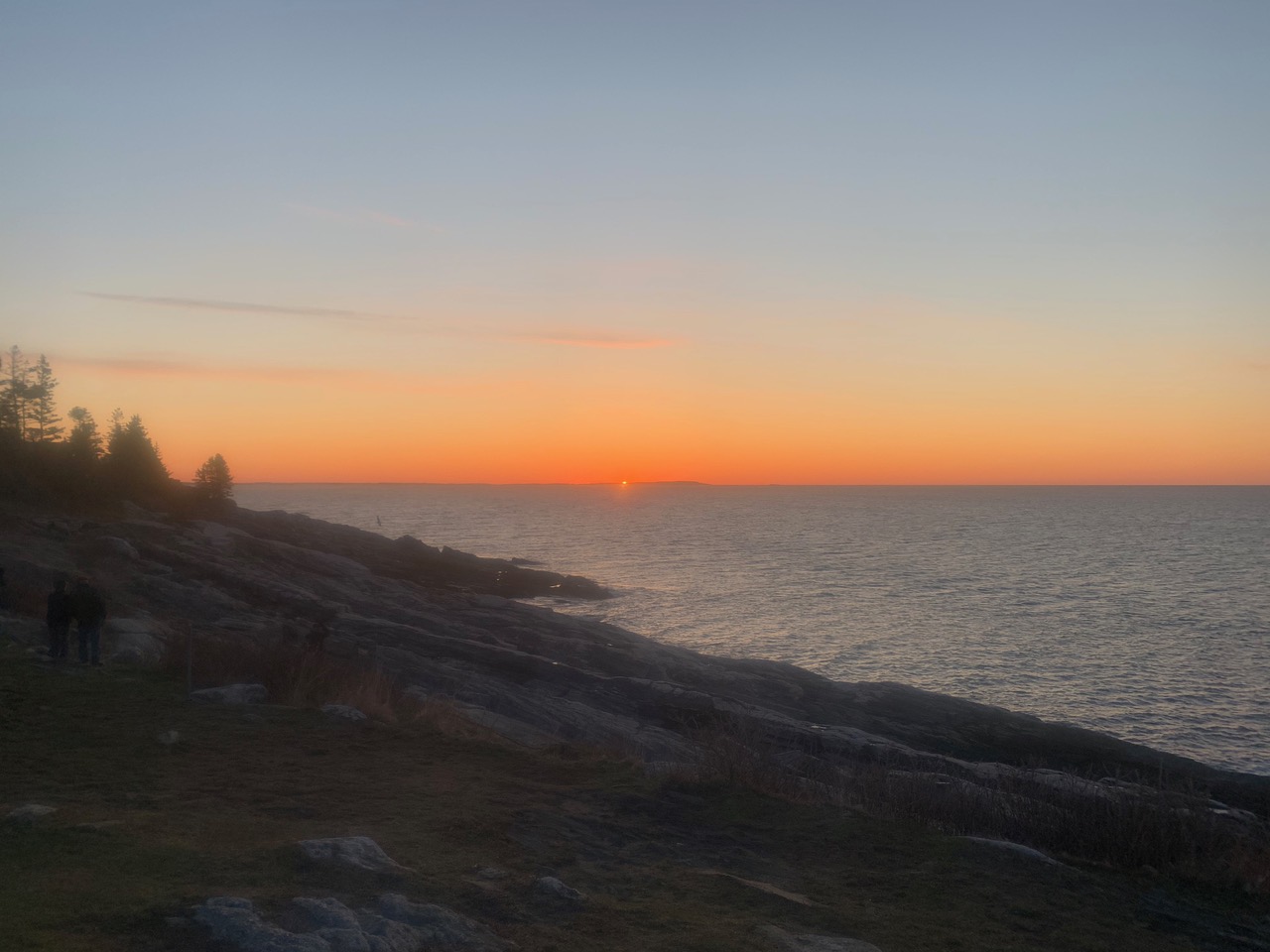 And when I say ‘I go’, I don’t mean off in the corner having some pantheistic ritual of my own, I mean full-on participation. I hold the program with numb fingers near my neighbours for the call and response, croaking out the familiar hymns with our phlegmy voices. The homilies and prayers – mercifully brief – are shouted over our woolen heads and scarved faces.

The lighthouse looms black at first, but goes to grey, then glows red, orange and yellow. By the time we have greeted each other, surveyed the sea one more time and turn to go, the lighthouse has settled to its reassuring white.

But that chilly service is but half the ritual: we all repair to the church basement back in the village. Off come the coverings, a wall-trellis of coats blooming with colourful mufflers and sprigs of glove. We all sit down gratefully to a really bad breakfast of bland eggs and weak coffee. We sit next to people we never otherwise see. Someone will make the old joke: ‘Well, if you don’t believe in Resurrection, just come here on Easter’. We share tales of the winter’s depredations on our houses and the coming gardening. It’s all so wonderfully grounded and simple, and we are all cheered up by it.

But of course none of that happened this year of the pandemic. There will be an online service later this morning, but I will not attend. Instead, I rolled out of bed at 5, and got there for sunrise. There were a few other people there – easy to socially distance on that windy point – and we all called ‘Happy Easter!’ to each other when the sun had risen. But no bending together in the Lord’s prayer, drilled into my cellular memory during the endless Protestant services of my youth, no convivial passing of biscuits and looking at pictures of grandchildren, just a sigh and a return to my weeks of solitary dance with this keyboard.

‘Xristos anesti’ – Christ is risen! – The Resurrection has long been the principal story, forgive me, selling point, of Christianity – the triumph over death. It’s a great story, but this year that particular story seems to be more a metaphor for our current pandemic situation. In those days, you were not counted as fully deceased until you had been dead and gone for three days – in case you were in a lead-induced coma and suddenly revived? I don’t know – but to count as a true resurrection, Jesus had to be in the tomb for three days.

(Sidebar: The Greek Orthodox church has their biggest service of the year at midnight on Saturday night. The Greeks have been fasting all of Holy Saturday, so when I went to these services, they crowd the church with this huge celebratory service at the earliest possible hour of Sunday, and then go home to feast and sleep and loll about all day.

I always thought the patriarchs were playing a little fast and loose with God: Presumably Jesus ‘gave up his ghost’ late Friday afternoon, so it seemed less than sporting, given the three-day minimum, to pull the magical ‘prestige’ of rising from the dead by midnight the next day.)

Anyway, back to our metaphor: we have put our economy in the ‘tomb’. It needs to stay there for the a good three days to rid ourselves of this peste. But already we have people more concerned with the image of religion rather than its deep practice, including Mr Orange, calling: ”Roll away the stone!” to hurry along the miracle. And the same will be true: It won’t be a real resurrection if we do not wait the full measure of devotion.

OK, boomer – social isolation as a religious practice. Got anything else in there?

Yeah, I do, actually – back to religion as technology for the soul. The key technology of Buddhism is its confrontation with suffering – right now, in this life, not as some ‘this is good for you’ preparation for the next. The key technology of Christianity for the modern age (this is all IMHO) is not defeating death but the radical forgiveness Jesus showed on the cross, before ever he was laid in the tomb – the kind of difficult practice most recently demonstrated for us by the startling and ennobling vulnerability of the parishioners after the shooting at the Emanuel AME church, arising from the example of MLK 60 years ago.

The primal act of forgiveness comes early in his ordeal – ‘Father, forgive them, for they know not what they do.’ This practice requires a true emotional sacrifice, an inner humbling, a submission, a yielding of the oh-so-understandable instinctual ‘justice’ of an eye for an eye. It is countering that instinct which is an inner spiritual act. You can feel that shift in the body, that twist of the baser instinct, something akin to pain but not quite, when you make that change from the fire of righteous anger to the mirror-smooth, cold spring of radical forgiveness. It feels good only afterward; the shift, especially for men it seems, is agony in the making.

But it is His second act of radical forgiveness that I want to point out this Easter: Late in the day comes the first lamenting line of Psalm 22 – ‘Oh God, my God, why hast thou forsaken me?’ (Sorry, I’m so old I still prefer King James to the RSV.) This is the very deep despair of a human dying alone. Yet his very last words are triumphant: It is accomplished!

It’s a good and a tough practice to forgive others – but it is really tough to radically forgive yourself. In those last words, he acknowledged what he had actually done – what an act of self-forgiveness!

In this time of our solo flight together, many aspects of our inner selves may be being revealed to us, and it’s not always a pretty sight. Our despair, our compensations, our inner thoughts, suppressed in the whine of daily commerce, may be rising to an audible level, and you long to push them back down – where’s the remote?

This time is especially and uniquely appropriate for radical self-forgiveness, the deepest practice. In pop psychology, self-acceptance and self-forgiveness has taken on a Californian sheen – ‘Everybody gets a gold star’, ‘You’re a good enough parent’, ‘Be kind to yourself’, or the teeth-grating, ‘I deserve this’.

No, radical self-forgiveness requires a very clear-eyed look at your shortcomings and ‘sins’ of commission and omission. And then you practice that same inner energy shift – I swear, it’s bodily, something happens in there, neurally or hormonally, who knows? but it’s more difficult with yourself, the inner voices against it are really strong. I know, I struggle with them.

Practice true self-acceptance this Easter. Don’t settle for telling yourself parental platitudes and NewAge shibboleths from someone’s thought-for-the-day calendar. If we truly look inside at our venal little lives, at our tiny virtuosities and silly sins, it is easy to fall into despair. In fact, despair is a fairly high spiritual state, and a good prelude to the harder work of totting up all you have ‘accomplished’.

Careful – it’s not the accomplishments of the outside world that count on this abacus, only your own inner sums. But we don’t do our inner math with accuracy. Losses and failures count larger than successes in our subconscious calculations. Accomplishments in your relationship or in raising a child or easing out from under your parents’ shadow – your deep inner work to change and accommodate – are difficult to see in the first place, hard to put a number on once located, and hard to ‘integer-ate’ as solidly as 3 x 4 = 12. It’s more like a koan, the square root of minus one.

This is work for us all now. Soon – how soon? we all want to know – this time of isolation will pass, all things do. When it passes, this opportunity for looking inside will pass too – do not miss its rosy petals among all the thorns that are pricking us in our surface lives.

The deeper life is calling, right now, in the stillness of this Easter morn. Can you hear it? Soon enough, the joyous cries of resurrection fill the air. This moment of stillness – and we had to bear a heavy sacrifice, all unwilling to get to this moment – is precious time gained for inner work. Be patient with yourself, but the call is turn inward. Use the time, heed the call. 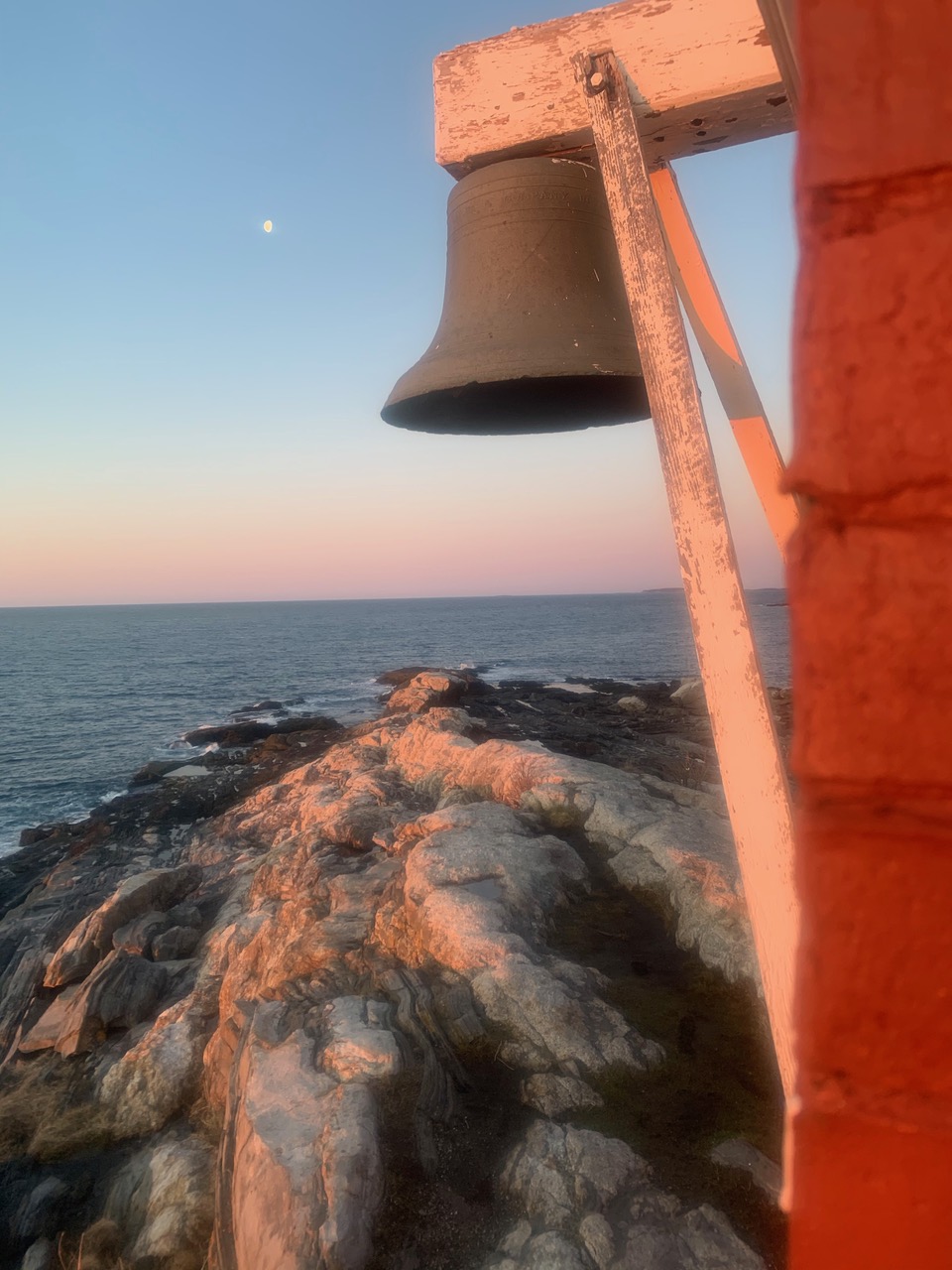