Thanks to guest blogger Lauri Nemetz for her fascinating report.

Fascial Manipulation and Anatomy Day at Touro with Antonio Stecco

Open nearly any health or fitness magazine (or even gym schedule) and the word “fascia” often pops out. However popular it has become with self-proclaimed experts and blasters everywhere, the science behind it is still evolving and needs clarity. Even for those of us who spend much of our time teaching and working with it, our challenge is often how we communicate with other clinicians and anatomists in this area. We need to continue to learn. In addition to the Fascia Research Congresses that gather every few years internationally, the Fascia Research Society (FRS), “has been established to facilitate, encourage and support the dialogue and collaboration between clinicians, researchers and academicians, in order to further our understanding of the properties and functions of fasciae.” (FRS website, 2016). Part of their mission is creating educational events, such as the recent FRS event at the Touro College of Osteopathic Medicine (Harlem, NY) with Antonio Stecco. 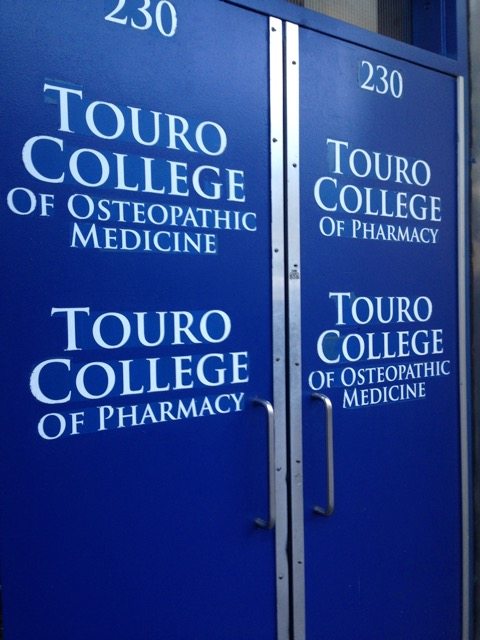 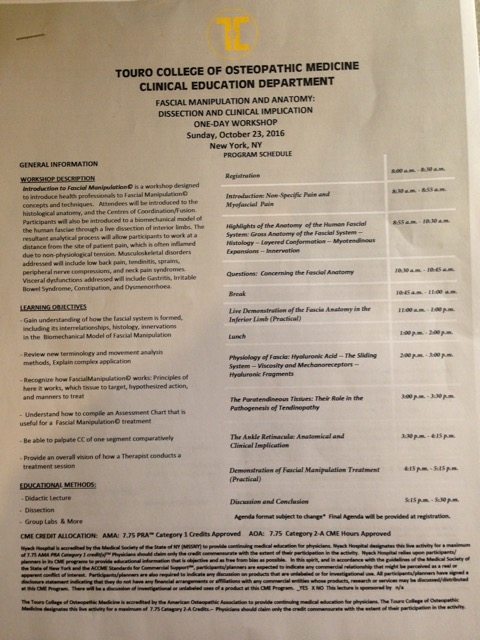 I appreciated exploring the latest in fascial thinking as well as being reminded that fascia has been part of us and our anatomical history for quite some time. We are familiar with the giants of anatomy, including Vesalius, but we were reminded there have been many, including Giuseppe Nazzareno Sterzi (1876–1919) who published in 1910 a book on “Anatomy of Subcutaneous Tissue”. Of course, Anatomy Trains© has been a large part of the modern re-interest in myofascial connection and has been part of the ongoing dialogue, with Tom’s third edition of the book readily exploring many of the most recent concepts in learning about fascia. 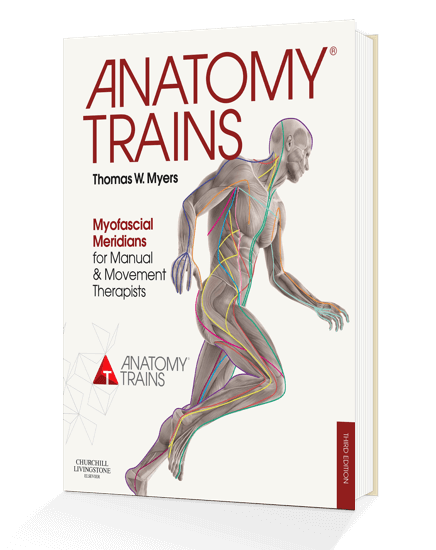 For those of you unfamiliar with the Stecco family, they are respected in the dissection and fascial worlds for their contributions to the field. Antonio Stecco, MD, PhD publishes and teaches extensively in fascial research as well as training others in Fascial Manipulation®. His sister, Prof. Carla Stecco, is an orthopedic surgeon and professor of anatomy and sport activities as well as the author of Functional Atlas of the Human Fascial System (2014). Their father, Luigi Stecco, is a master dissector and author of several books, including the newly published, Atlas of Physiology of the Muscular Fascia (2016). I may still disagree with some of the European ideas of fascial layering (particularly what constitutes superficial fascia), but I have tremendous respect for the knowledge Antonio Stecco comes with and for his enthusiasm for teaching. As a professor myself, I appreciate his questions, which probed our thinking or tested our visual knowledge. Many hours in our dissection labs helped me quickly identify the ribbon candy-like picture of the platysma and I enjoyed dialoguing with osteopathic doctors, PTs, chiros and others who were encouraged to think about fascia on many levels. 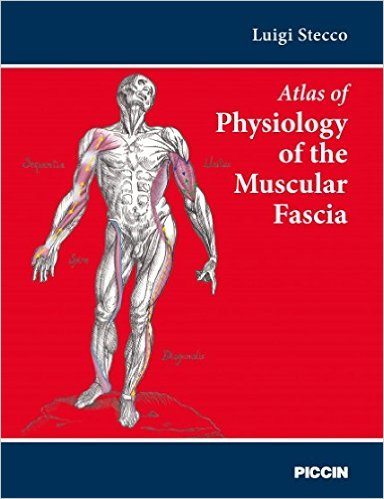 The day focused on several lectures from “Physiology of Fascia: Hyaluronic Acid” to “Paratendineous Tissues: Their Role in the Pathogenesis of Tendinopathy”. Largely concentrating on the lower body, we spent some additional time in dissection lab with Stecco looking at fascial pocketing in the lower limb as well as the ankle retinaculae. A well-rounded mix of didactic, hands-on and visual kept a rather full day quite lively. 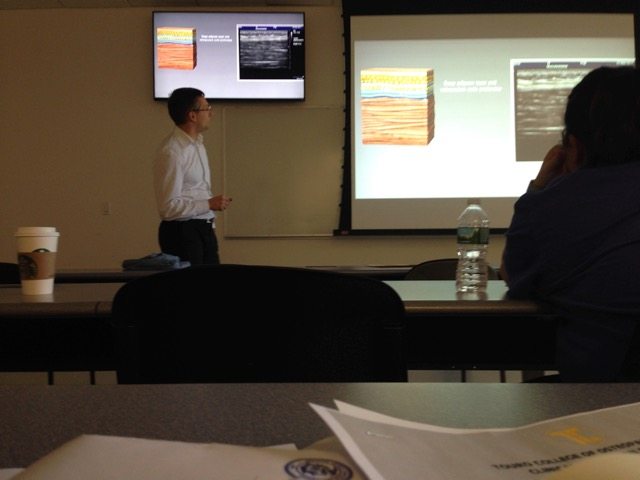 In particular, Stecco discussed the role of hyaluronic acid in relationship to sports. In discussing a recreational marathon runner, for example, he noted that exercise will increase lactic acid and also increase the viscosity of hyaluronic acid which leads to stiffness in the fascial tissues, sometimes referred to as MPS (Myofascial Pain Syndrome). Sliding problems between the deep fascia and other layers can be caused by an increase in densification of the tissues. Therapy (particularly manual) is being studied for its role in changing the viscosity of hyaluronic acid. A therapist should work where there is densification, not where there are symptoms, and also recognize that inflammation may appear post-treatment. Center of coordination is situated in the deep fascia and this connection is being explored by Stecco in a pending paper on muscle stiffness in spastic patients. If muscle spindle cells are embedded in dense connective tissue, the message to the central nervous system can be compromised, causing muscle coordination issues, like the athlete post-marathon who has difficulty walking. A related paper by Stecco (2013) is entitled, “Fascial components of the myofascial pain syndrome”.

Stecco additionally highlighted the connection to the role of retinaculum to proprioception. This may be my largest take away from the day. Retinaculum, as many of us can agree on, is not a separate band of fascia, but rather a thickening in the layering of deep fascia that is apparent in areas such as the wrists and ankles. We tend to think of its role as a necessary band to strap down the tendons lying underneath while still allowing sliding and gliding.

However, the second role of retinaculum to proprioception isn’t discussed as often, and has a huge relevance to our clinical and teaching work. A thickening of fascia would of course be filled with a high proportion of neurological receptors. Why would nature choose to concentrate it in these areas? Think about the wrists and the ankles, which are prone to injury due to their vulnerability anatomically, but in a natural environment need to respond to changes in movement quickly and rapidly. Placing high levels of fascia here can make those areas sensitive to changes in location.

Think of talking a walk in the woods when your foot lands into a leaf-covered ditch. One feels the ankle twist, but does the retinaculum perform as it is meant to – responding quickly to sensory information and readjusting the body, or does the damage lead to an ankle sprain? Stecco noted that proprioception loss is high post-ankle sprain and is an important part of rehab to consider. He is one of the authors of the article, “The ankle retinacula: morphological evidence of the proprioceptive role of the fascial system.”

I’m still thumbing through my notebook from the day and thinking of clinical applications for my own students and clients. In opening his lecture for the day, Stecco noted that the Scientific Revolution is often attributed to three major events: 1) the invention of the telescope 2) the botanic garden and 3) the anatomical dissection theater. Investigating anatomy is indeed a rich area of exploration. 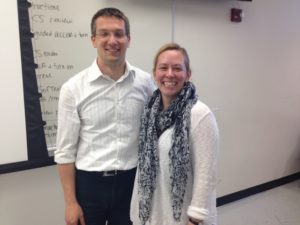