We’re delighted to welcome our Anatomy Trains teacher, Lauri Nemetz, as a guest blogger for this post on her exciting recent dissection project. Stay tuned to the blog for future guest posts from our teachers and friends.

“An idea, like a ghost … must be spoken to a little before it will explain itself.” ~ Charles Dickens, Dombey and Son, Chapter XII (1848) 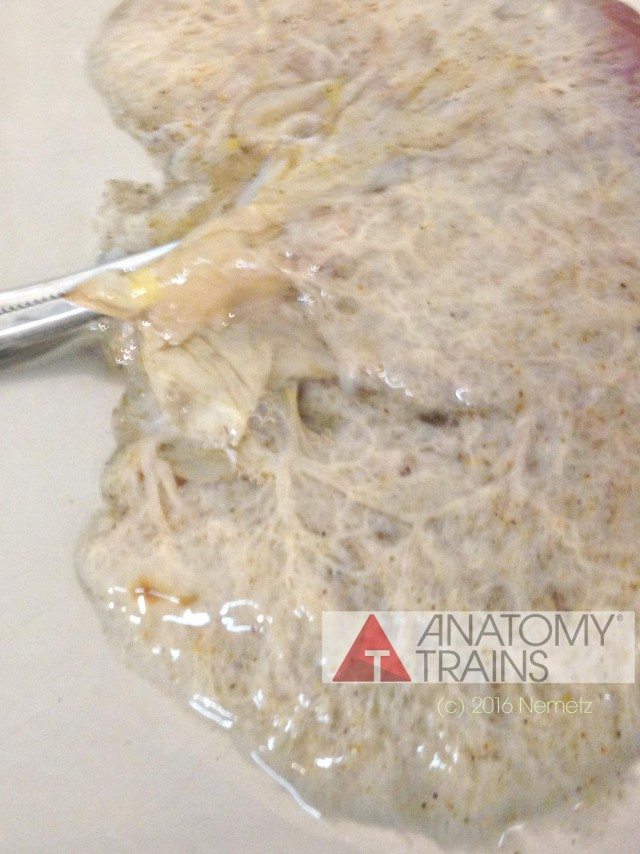 I first became interested in the idea of creating “ghost” organs and other fascial models when I saw Tom Myers lecturing on an image from the Visible Human Project of a rotating thigh, stripped mathematically of the muscle tissue, leaving a beautiful 3D image of the ECM (extra-cellular matrix). A still of that image, by Jeffrey Lin, is in the 3rd edition of Anatomy Trains. At the time, it was purely theoretical: “wouldn’t it be amazing if we could create this sort of model?”

As Tom noted, “If we could imagine that instead of using a sharp edge we immersed an animal or a cadaver in some form of detergent or solvent which would wash away all the cellular material and leave only the connective tissue fabric (ECM), we would see the entire continuum…” (Anatomy Trains, 2014, p. 15).

Other anatomists have been interested in this concept. As early as 1988 (recent in overall anatomical history, but groundbreaking in the world of fascia), Jaap van der Wal was dissecting muscle pockets and looking at the fascial walls as part of his doctorate thesis. As he wrote later:

The connective tissue anatomy and architecture exhibits two functional tendencies that are present in all areas of the body in different ways and relationships. In body cavities, the “disconnecting” quality of shaping space enables mobility; between organs and body parts, the “connecting” dimension enables functional mechanical interactions. In the musculoskeletal system, those two features of the connective tissue are also present. They cannot be found by the usual analytic dissection procedures. An architectural description is necessary. Van der Wal (The Architecture of the Connective Tissue in the Musculoskeletal System—An Often Overlooked Functional Parameter as to Proprioception in the Locomotor Apparatus, INTERNATIONAL JOURNAL OF THERAPEUTIC MASSAGE AND BODYWORK—VOLUME 2, NUMBER 4, DECEMBER 2009)

Peter Huijing , PhD (Vije Universiteit Amsterdam) also has worked on 3-D reconstructions, from frozen rat cadavers, to show the fascial continuities in the crural compartments and to demonstrate that the reality is more the connection than the separation. To my great pleasure I got to meet both van der Wal and Huijing when I presented my own research in this area with a poster at the Fascia Research Congress in Washington DC in the fall of 2015, “The heart of fascia: initial steps toward a three dimensional model of the human extra-cellular matrix in dissection” (Nemetz, Fascia Research IV, 2015, pp. 30-31).

I first saw the well-shared image of the “ghost heart” a few years ago, widely circulating on the internet, courtesy of Doris Taylor, Director of Regenerative Medicine Research at St. Luke’s Episcopal Hospital in Houston (Texas Heart Institute). The image, held in gloved hands, is of a shimmering, translucent heart. Articles followed, outlining the process of stripping organs of muscle, leaving the ECM as a scaffold to reintroduce healthy cells from a patient needing the organ. The idea is that the re-seeded organ would be less likely to be rejected by the recipient needing it. At this moment in the US alone, several hundred people die each year while waiting for organ transplants that don’t come in time.

As noted in a recent article on Doris Taylor,
“’Decellularization is very simple…’It’s essentially just washing out the cells. You have something that goes from a red, muscularized organ to an acellularized construct over a relatively short period of time, while leaving the extracellular matrix composition intact—it literally looks like you took a tube of toothpaste and squeezed. What’s left is the structural composition. We have the ability to recapitulate a whole heart…We determined that we could take one of these decellularized hearts and simply put cells back into the vascular tree to recellularize the whole network.’ Taylor is driven to ultimately reseed hearts using cells from a given individual to manufacture an available, tailor-made organ for transplantation.”” (2015, PIONEERS OF REGENERATION, TMC News)

In my several years of participating in, and assisting dissection labs, the predominant type of cadaver had been embalmed tissue, usually with mixes of formaldehyde, which renders a lot of the connective tissue into a cotton candy like substance and creates some artificial rigidity. Now, the preference is towards fresh tissue (frozen) which is much more natural in movement, and makes possible the idea of creating a “ghost heart” or other organ as the fascia has not been radically changed. Although my goal is not to reseed these organs with stem cells, I am interested in creating models that can be utilized to “see” the fascial web as a map, instead of our traditional musculoskeletal anatomy.

My formula? From my research abstract (Nemetz, 2015 FRC):

…15 step process to create the final model based on several current articles. Replacing sterile salt solution, the author created a saline solution with kitchen salt and water. Instead of trypsin, which is used to cleave peptide bonds, bromelain (from fruit like papayas) or meat tenderizer can be utilized, the latter of which was chosen. Instead of Triton X, which breaks up fats, any strong commercial detergent can be utilized with sodium laurel sulfate or sodium lauryl ether sulfate (SLES), which is an anionic detergent. This has been done is several experiments. The author utilized a common shampoo with a high percentage of sodium laurel sulfate. Finally, an “OxiClean” type product, primarily sodium percarbonate (2Na2CO3•3H2O2) was utilized in the final steps, creating an interaction between oxygen and water, acting as a non-chlorine bleach.

I mapped out the general outline of common household ingredients that resembled those used in the scientific articles. I didn’t need sterile solutions as I wasn’t prepping for surgery, but I wasn’t sure that my process would be exact enough. Knowing others even in the scientific community use common shampoo for the sodium laurel sulfate, which particularly strips fats, I searched the shelves for one with that as a primary ingredient and looked at what worked, keeping in mind that too harsh of ingredients would destroy the ECM. Since my technique and ingredients are primitive, it is difficult to take out the cellular tissue in certain areas of the body and retain the finer connections. Hopefully, in the future this will become easier. I liken the process to dark room photography, where one used to use a series of “start” and “stop” and baths to work through different chemical processes. Leaving an undeveloped photo too long in any one process would destroy the print, much like the organs in this process- too much time could break down the ECM itself.

From the first heart experiment (rather successful in 2015), I repeated this with 5 additional hearts during the three weeks in Anatomy Trains © dissections in January 2016. The results all began creating the scaffolding, with the most successful being the heart from a cadaver that had not been previously frozen prior to lab. This would be the closest to the process desired for organ re-transplanting. While deep-freezing weakens the cell walls, necessary to start the decellerazation process, too much time would likely cause too much collapse.

I was curious to try a different organ during the very last week and chose to look at a kidney. I dissected away the normal fat covering of what appeared to be an otherwise healthy kidney, but I was skeptical that the process would strip away enough of the non ECM portions of the kidney. However, as seen here, the kidney transformed quite well.

Here are the results of the “ghost” kidney (as seen in the pictures). To conclude, I’ll quote the writer and art historian, John Berger from his pivotal work, Ways of Seeing (1972), “The relation between what we see and what we know is never settled. Each evening we see the sun set. We know that the earth is turning away from it. Yet the knowledge, the explanation, never quite fits the sight.” Challenging the traditional ways of seeing brought me to Anatomy Trains in the first place. Fascial models will no doubt become more common in time, but bring up new questions about how we visualize the body. 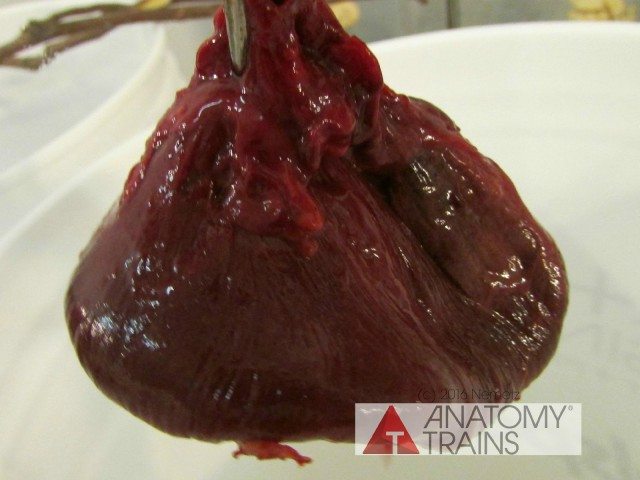 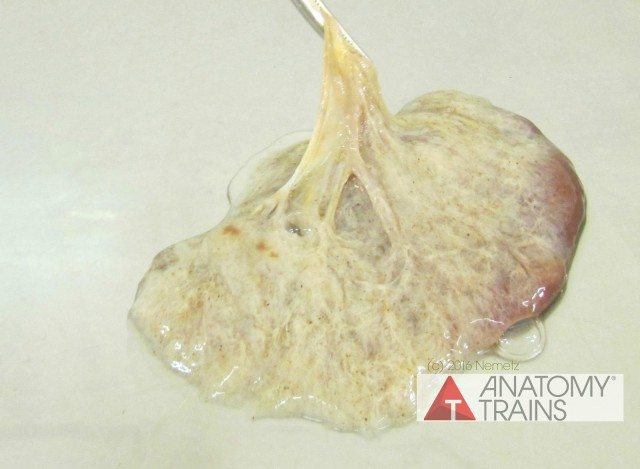 Lauri is a certified Anatomy Trains ® teacher and teaches AT for Movement courses throughout North America and has been an assistant for the Anatomy Trains Dissection labs since 2014 .  She is a registered experienced-level yoga teacher (and RYT 500), Stott Pilates® certified instructor, a board-certified member of the Academy of Dance/Movement Therapists and a licensed creative arts therapist (psychotherapy). She is a past president of the YTA (Yoga Teachers’ Association) and has been a professor at Pace University since 2007. In addition to teaching movement and anatomy and working as a therapist with a wide range of populations, Lauri leads yoga and kayaking trips on the Hudson river, in Canada and in Costa Rica.  She lives in the Hudson Valley with her husband and two high school boys.  More info on her at: www.wellnessbridge.com