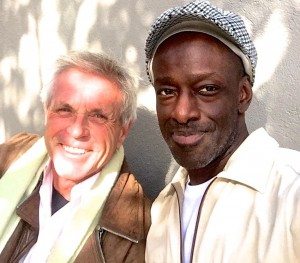 I don’t often get out to Brooklyn, and in Dièry’s neighborhood of Prospect Park the back yards – ‘gardens’ they would be called in England – create at least a little island of calm in this very noisy city. Looking down on all of them from Dièry’s top floor – a jumbled jungle of greens.

But to step outside into Dièry and Mariza’s little piece is to walk into a little peace, a Zen garden of elegant straight lines and spare simplicity. Nevertheless, there are objets – some old dumb waiter flywheels, and to my surprise, by the time we have finished our ‘workout’ – for Dièry and I immediately fell into what we love the best, working with the body – the dumbwaiter wheels became a barbell, some granite bits became kettle bells, a decorative metal ball a shot-like weight to be transferred and balanced.

He does have some ‘equipment’, but his attitude to equipment is much the same as Ian O’Dwyer’s – only a means to an end. For Diery, (surrounded by the severe but whimsical diktats of fashion – his wife is a designer of many years’ experience) what is functional must be beautiful and simple. A couple of dog leashes for TRX-like resistance work, a long rubber band for supported elastic loading – all can be stowed in minutes to return it to a pristine garden, and set up in another two minutes to provide a full body gym in your back yard.

I have to say this is a relief after a couple of days with Equinox, where every innovation is dumbed down (OK, ‘refined’) to its essential message, while the execution is padded out for maximum money. (Sorry, I love everyone there, but it’s true – it’s a bit like a hospital: everyone who works inside is sincere in wanting to help, but the institutional bias is like a tide that carries everyone along toward heroic intervention in the case of a hospital, and ‘actionable bases for monetized services’ in Equinox – it can get jargonistic.) Diery is the opposite – a rich vein of information funneled with the effortless ease of the true professional through a narrow spread of of physical aids. I do understand the differing needs of a behemoth like Equinox vs the lonely hunter, but I surely resonate more with the latter, being one myself.

Dièry has absorbed the cools-mopolitan aire of the French jazz musician – Paris is where he cut his teeth. I imagine him from West Africa, though I never asked his provenance, New York, I guess, in actuality. But no amount of cool can hide his passion for his work: liberating the body in general and producing an SMR (common parlance: roller) device in particular. His RolPal, after 5 years of R&D and struggle, is about to break upon a unsuspecting world, being taken up by some starring athletes, songsters, and maybe Equinox – but mostly because he just got a very positive article in The New York Times, so orders are rolling in. He claims to have mimicked the human hand.

Nevertheless, you’ll not find anyone more skeptical than me on this point. I often hold up my hand when these questions come up – as they inevitably do – and say ‘4 million years of on the job training!’ – meaning that your hand is more intelligent and sensitive than any – any! – of the devices that anyone has assured me is the best thing since sliced bread. I have always liked to slice my own bread and always preferred the human hand to any Fulford percussor, Fascia-lator, or other machines or self-help tools. That said, I am aware not everyone can afford their own personal bodyworker, and besides, there are ‘quick fixes’ you can provide for yourself with a tool as prep for movement, emergency first aid, or just getting at that troublesome spot.

Dièry and his co-inventor — Brooklyn artist and industrial designer, Fabrice Covelli (fproduct.net) — have come as close as anyone I’ve seen, with silicone knoblets of varying size and density coating the various mats and rollers. I have seen tools come and go over the years, reconnoitering with Cassidy Phillips with his trigger point tools, and Yamuna, Ellen, and Sue with their various balls as self-help tools. All are helpful, of course, and all in the best of intentions. But the effect depends on the way they are used more than the tool itself – I’ve had Yamuna ball sessions led by Yamuna, and some led by her students. The balls are the same, the result is not. Dièry’s silicone surface gets fascial ‘grab’ and can thus exert shearing force, provided you can get into the layer that needs shearing. And in certain positions the knobs really do work into you like fingers.