The suffering of an animal, like the suffering of children, puts our internal justice-maker on the warpath.  Our gray cat Simon made a beeline out the door last night, determined to have an October prowl. Wherever he was attacked, he made it back to the pasture near the garden, where the horses, and then Annie, found him in the morning.  Really bloody and beat up.  A canine bite, said the vet, meaning a fox, or a coyote, or a neighborhood dog, with broken ribs and contused lungs and a torn brachial plexus – how did he get away? – and a lot of blood lost.  We had to let him go.  It hit me hard.
Simon had a hard early life, and I sympathized with his outsider status.  A hyper-allergenic cat – even I reacted to his dander, and I never do – he was passed on to us from my sister, whose husband couldn’t breathe in his presence.  I adjusted, but the alpha male cat in the house chased him out, and he reluctantly became the barn cat for a year or two.  He had companions – like Ozzie (Ozymandias) in the background of the photo – but not a sense of belonging.  I felt bad for him, left out of the house those long winter nights, but nothing could be done.
Then two years ago, Annie’s cat died and Simon got to live in her farmhouse, and wasn’t that a turnaround point!  She got him dematted and groomed to a gun-metal sheen.  He looked at you with such a human look – it was disconcerting to see someone was looking assentingly at you out of those gray-green eyes.  Ozzie – the yellow one – is a cute cat with a great sense of play, but he doesn’t have two synapses to rub together between his ears, poor little soul, but Simon was a leader who had trouble finding his place.  His last looks from the cat-carrier were looks of adoration for Annie, despite his obvious pain.   I am so glad he got two years of belonging.
I had a long talk with the vet, and she agreed with me – it’s a great danger to let cats roam, and she gets grief from the veterinary community for her position, but it’s the same as mine: security comes at the cost of imprisonment (the cat staring longingly out the window), and freedom comes at the cost of danger. 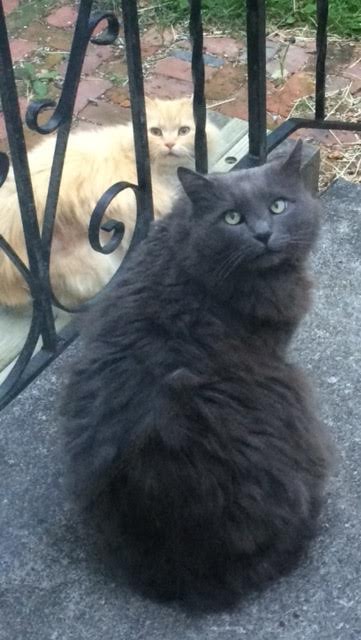 Come back, you big old boy, find another body and come back to us.