I’d recently been advised to read this article, which has been floating around the interwebs for a couple of years now, but is worth looking at again:

Since this fellow is both sincere and clearly referring to our work, he deserves a response.

In every young science that has a ‘public’ interested in it, there will be excesses. Look at nutrition: there is a science in there, but I was just at the Equinox High Performance Living Summit, watching the supplementists fight it out with the Mediterranean diet folks, Paleo diet enthusiasts, intermittent fasting experts, the vegans, Atkins, good fats, bad fats – you name it, there’s a diet for it. Given they are mutually exclusive, they cannot all be right. It will take time and research to find out what works when for whom. It’s a young science, not yet mature, and therefor subject to fads, wild swings, and a gullible public.

Now, over to Dr Lehman and fascia: So biomechanics is a young science, and one in the middle of a big revolution, equivalent of moving from Newton’s physics to Einstein’s. Without doubt some of the public advocates of fascia – the ‘afascianados’ as Andry Vleeming calls us – have put forward some pretty silly exaggerations, which will not stand the test of time or research. Fascia is no panacea, nor a miracle (any more than anything else in this miraculous universe), nor anything new.

But I am standing by the ones Greg calls out in this article, though on some others I have been forced to eat my words (I find them a most nutritious diet).

For instance, when I started lecturing about fascia, I understood it to be inelastic; “Muscle is elastic; fascia is plastic” I would say.  Research – extensive research, starting with kangaroo tendons and ending with ours – have proven that false: fascia has a high (and very useful) ‘coefficient of restitution’ (love that phrase).  (Fukunaga 2002, Reeves 2006, Kubo 2003)

I am also standing by the relevance of the new understanding of our ‘biomechanical regulatory system’ (what ‘fascia’ really refers to) as relevant to healing, functional training, and the condition the human condition is in. To the two main assertions here, I have to say, “Look at the research.”

1. If we “rub, pin, release, contact, shear or roll-out” fascia while pressing our digits/utensils against the skin we can somehow modify fascia.

Sorry, yup, it does and we can. The research is too numerous to mention, I simply refer you all to the Journal of Bodywork & Movement Therapies for any numbers of demonstrated modifications of fascial ‘densification’, visceral adhesions, and dehydrated areas where gelling occurs. (Kjaer 2013, Klinger 2012, Schleip 2012, Stecco 2009, Bove 2011, etc)

Exactly how it works and what the limits are is certainly up for discussion. (I have cranial osteopaths telling me they can alter the length of the sacrotuberous ligament with 5 grams of pressure, to which I have to ask: Have you even done some dissection and looked at that structure? Do you know under what tension it lives its life? This seems to me a ridiculous claim on its face. I may have to eat those words too.) 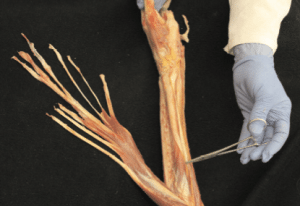 That guy always rolling out his IT band with a grimace on his face is – according to my readings – not getting much bang for his buck (or his pain). SMR rolling in general has affects on all tissues – neural, muscular, and epithelial as well as connective tissue. Significant gains in muscle tone, Greg and I agree, are likely not on the table, and anyone claiming so needs some back-up.

Some fascial adhesions (from trauma or surgery, or simply of such long standing) are probably not modifiable manipulatively, although a lot will eventually ‘melt’ with a lot of patience and skill.

But fascia, Greg, is a lot ‘smarter’ than muscle – with around 6x more sensory nerve endings in muscular tissue. Muscle changes state quickly when stimulated – that’s its joie de vivre – and will change volume and strength if stimulated strongly and consistently, but fascia has a lot more variety in its responses (viscosity, elasticity, plasticity, and remodeling) that have long-term affects on range of movement and its coordination.

(I agree: no motor endings in fascia; arguments for ‘fascial contraction’ outside the limited scope of the myofibroblasts are resting on thin air as far as I am concerned.) Continued below… 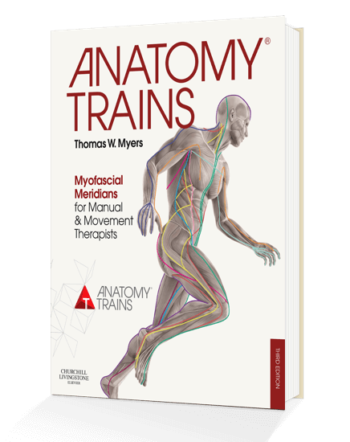 The brand new Anatomy Trains book (3rd ed., 317 pp) maps the longitudinal myofascial connections – how the muscles are functionally linked in ‘myofascial meridians’ through the fascial webbing. Anatomy Trains opens a unique window to the anatomy of connection via this book – fully illustrated in 4-color with new anatomy art, fascial dissections, and… Read more

2. If you have pain in one part of the body you have to follow that fascial line/link/chain/train and treat the whole thing.

That’s not what I said, but I’ll stick with it here anyway. What I said was: If local treatment is ineffective, especially in chronic conditions, look out along the ‘nap’ of the biological fabric to see if the restriction / misuse / pain is founded in restriction elsewhere. The Anatomy Trains is simply a map of the ‘grain’ in the myofascial fabric, so (like most maps) only an indication of a good place to look.  In 40 years of practice, I have been surprised again and again by the connections people forge (correcting patellar chondromalacia by working on the palate?) that cannot be justified by myofascial meridians or any kind of direct fascial connection.  Or muscles either.

‘Treating the whole line’ is something I hear back from the trainers a lot, but it’s my court of last resort, not a requirement. If all else fails, treat the whole line, but with a good eye and a knowing hand, you can make that work much more efficient by seeing where in the line the restriction is.  Many bodyworkers who use their thumbs for TrP work get pain at the base of the thumb.  A goodly number of these can be better helped by opening the pectoralis minor fascia at the other ‘end’ of the Deep Front Arm Line in conjunction with whatever you do locally for the carpometacarpal joint tissues. This is anecdotal; I have neither the money or the interest to ‘prove’ this – I do what works for my patients.

While it’s true that you can dissect almost any set of connections you want out of the well-named connective tissue (and Huijing and his associates have documented lateral connections not contemplated in the ’trains’ theory – Huijing 2009, et al), I believe the Anatomy Trains will mostly stand the test of time in terms of functional continuities, because of the way they conform to the fiber direction within the myofascial fabric.

I see ‘effects at a distance’ every day, in both compensatory patterning and in treatment.  I care not a whit whether the effects are carried through fascia, nerve pathways, or other reflexes we know nothing about.  I am fascinated (but not yet convinced) by what kind of information the ‘liquid crystal’ (sorry, demonstrated, not New Age) of the fascia could store, but I will be neither disappointed nor surprised if this turns into a dead end.

What I cannot do is turn backwards toward an explanatory model – Newtonian biomechanics – that is so full of holes and contradictions, and explains so little while obscuring so much. There is a wholeness to a human being, a synergy that is not explained by the sum of the properties of the parts. Chiropractors have had to give up on ‘subluxations’ in the face of contrary evidence; I will give up on Anatomy Trains in the face of contrary evidence. Jeering doesn’t count, but I am glad Dr Lehman is engaged.