One of our followers on Facebook recently posed this question to Tom:

What are the current thoughts about the fuzz speech? There seems to be a lot out there about it moving often and all the time which makes perfect sense, but it is also using information on a cadaver versus a living body. I seem to remember you saying in a webinar a few years ago that in the living body the fuzz doesn’t get so thick so fast and is easier to change. Still true? I want to be a little more accurate with current research when telling my clients about movement and the fuzz.

This is a large subject, which we will take up later this year, but here’s a short answer:

Everything is hooked together with everything else with ‘fuzz’ – areolar tissue that mixes collagen fibers with GAGs (glycoproteins, mucous) and often is liberally spiced with fat cells.

Yes, the ‘fuzz’ you see in an embalmed cadaver is dryer and more fixed than it is in the untreated tissue, and the fuzz in untreated tissue is probably less moveable than it seems to be in ‘animated’ tissue – this is based on feeling many living bodies as well as trying to ‘work’ on the untreated cadavers.  But without a doubt, everything is held together with fascia – much more than the books usually reveal. 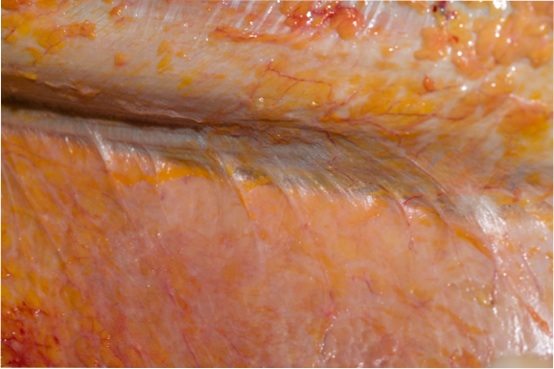 (Here’s ‘fuzz’ as it exists in an untreated cadaver. Above is the biceps, below the brachialis. It is routinely cut in dissection and rarely appears in anatomy books. It definitely allows movement between the muscles, but it also definitely limits motion and transfers force laterally between muscles. Imagine the upper muscle contracting or being stretched to the left – it would distribute force to the fascia of the lower muscle.)

We talk about muscles ‘sliding’ over each other – but in our dissections the traps are fuzzed to the rhomboids and the latissimus fuzzed to the serratus anterior – every time, no exceptions.  You have to put your fingers in to ‘break’ or ‘melt’ the fuzz to get the book-like origin-insetion behaviors of individual muscles.

The actual in vivo ability to move between adjacent planes of tissue will be determined by two factors in the fuzz – the fluidity of the tissue and the length of the fibers.  A) The more water in the tissue, the more the GAGs will soak up that water, and be more easily moved by stretch produced by our movements or a therapist’s hand.   B) The shorter the fibers, the less movement between the adjacent planes before the second plane starts to get carried along with the first.  Think of an old rickety ladder, where each stanchion is a plane of fascia and the rungs are the fuzz; the longer the rungs, the more the stanchions can shift relative to each other.

So looser, more hydrated fuzz will allow sufficient movement; tighter, dryer fuzz will efficiently transfer force from a muscle to adjacent fuzzed structures, other muscles, bones, vessels or fascial structures.  The dryer and shorter fibers will produce more stability (which is of course sometimes what you want and need – we are presuming ‘fuzz’ limiting movement where you want it).  Too loose tissue (hypermobile) can be as problematic as hypomobile tissue – the questions are all ‘where?’ and ‘in whom?’.

Taking the forearm as an example, the muscles are well fuzzed together at the proximal end up by your elbow – I do not believe that these muscles ‘slide on each other’ at the best of times.  There is some sliding within each muscle, but every forearm I have ever dissected, these muscles are bound together tightly, and are designed (I believe and Huijing conforms), to be fully connected and able to transfer force laterally to one another – it’s an efficient distributive system.  The walls between the muscles (septa) are firmly bound to each other, a bit like the sections of grapefruit – they can be separated, but in the living grapefruit they are well fuzzed together.

Down at the wrist end, the tendons clearly do a lot of sliding relative to the tissues around them, much more sliding than up at the muscle belly end.  These tendons have been shown by Guimberteau to slide in a complex and connected way through the fractals of ‘fascial foam’ (a multi-macrovaluolar sliding and shock absorbing system) between the tendon proper and the surrounding tissue.

The interesting part comes around halfway down the muscle: How far down ‘should’ they be joined, and when should the sliding party begin?  That depends on the person’s genetics, and the demands they put on their body.  So this ‘halfway down the muscle’ is often the most productive place to work on dissolving such ‘fuzz’ as is limiting movement – and of course that’s a rich area for fascial sensors such as muscle spindles, GTO’s, and other stretch receptors – so your work is both fascially and neurologically meaningful.

The hamstrings, for instance, can be fairly easily separated into three muscles almost all the way up to the ischial tuberosity, but in practice are often fascially joined with fairly thick ‘fuzz’ down the middle of the back of the thigh to a couple of inches above the knee.  ‘Should’ they be separated to give more ‘freedom’ to the leg movement?  Yes in a dancer or a yogi, but probably ‘no’ in a runner or football player.