“If you are sane in an insane world,” said R. D. Laing to me back in the 80’s, “ then you yourself are insane.”  Are we asking our children to commit an insane act and pretending it is the soul of sanity?  In requiring our ever-younger children  to sit for hours absorbing audio-visual information in school, we are shutting down the third – and still essential – window into learning: the kinesthetic sense, the felt sense of the body moving in the environment.

I am so glad to see the pendulum beginning to swing back to allowing kids to interact with the world.   Why ‘diagnose’ children and give them drugs when you are asking them to do something that we adults would also find crazy-making and impossible?  I am not a child psychologist, and I am sure their job is difficult, but it seems to me that much of ADD and ADHD is a sane response to the insane request we make of our children.  Even kindergarten has become over-academic.

Those of us over 60 do not forget how free life was for children in the 50’s and 60’s, when my mother’s sing-song admonition as I went out the door after school or on a Saturday morning was, “You be back by sundown!”

I may not have been any good at sports or physical competition, but find me any little stream and I became the dam-maker extraordinaire.  Give me some flat rocks and I could make them skip across the ocean to France.  Break the stiff branches off the bottom of a pine tree and arrange them in the softer branches at the top to make a tree fort to observe the porcupines.  None of this came from school or any organized program, but it organized me nevertheless, and prepared my body for the movements of life.

I was no model child – I was way lazy about chores, over-talkative enough to drive any parent mad, and badly self-absorbed – but life in the woods and by the shore offered plenty of challenges, and problems for the body to solve.  Sure, it also involved scraped knees, and occasionally worse, like when David Rice’s bobsled went out of control, launched off the snowbank and landed on the stone wall – and amidst all the hooting laughter Brooksie Doell came up holding his broken wrist.  We traversed the beams in the barn, and did stupid things in trees and along granite cliffs, and occasionally someone fell.  It made us careful, but if it happened, we all dealt – kids and adults together. 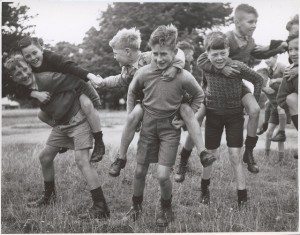 In the early 1990’s, in  an understandable parental response to a small number of horrific kidnappings, a series of laws that came to be known as Megan’s Law tried to legislate safety.  And along with it came an attitude, now completely absorbed into society: If you were a ‘good parent’, you didn’t let your child out of your sight for a minute for fear they’d be taken from you by some nut-job from the far reaches of humanity.  If you were a good school, you didn’t allow the children to endanger themselves in any way.  America became so ‘idiot-proof’ as my German friend calls it, that we no longer felt responsibility for anything, even the hot coffee you yourself put between your thighs.  Everything has training wheels and seat belts, and we never take them off.

Keeping your children safe ‘at all costs’ really does have a cost.  Today’s children are largely under a well-meaning ‘protective house arrest’, where every minute of their day is accounted for, mostly in a building or passing from one sitting activity to another.  Way too much of of our children’s life is spent sitting.

A child is like a seed – you can’t dig up a seed every day to see how it’s doing.  Once planted, it needs darkness, secrecy, and silence (and water) until it breaks the ground and shows itself of its own accord.  If a child doesn’t have secret places, away from adult supervision, how will he find out who he is?  Books are a great way to have a secret life, but the body needs one too.

We are a rich society, but our childhoods are threatening to become so impoverished.  Mens sana in corpore sano – a healthy mind in a healthy body – means the body needs to move.  A lot.  Especially in childhood.  Children who express this need are often labeled with these horrible names like Attention Deficit Disorder, when they are actually making a sane response to our insane request.

I know there are problem children, and I am not minimizing the difficulty teachers or parents face.  But we ask schools to babysit our children in an institutional way while we work, so we cannot be too hard on them when they work like an institution and are unable to find all the individualized pathways to learning that each of our children take.

But the fact remains: school is primarily audio-visiual, and kinesthetic arts are on the back burner.  Unless you are quite good at organized sports, many activities with a physical basis are being removed or reduced.  Phys Ed, music, art, dance, shop – even recess, as in this article – are all based in physical skill, all develop a reliable felt sense in the body – and all are being defunded.

No way are we going back to the hunter-gatherer way of life, or even the agrarian society (of which the summer off from school is still a remnant: you were expected to work on the farm then – another physical skill largely lost).  Even the industrial jobs of yesteryear – spinning on bolts and sorting widgets – have literally gone south.  Tomorrow’s jobs rest with the computer and require us all to sit and focus on the developing network of knowledge, I understand, I’m already there myself.

But the increasing numbers of these kids are not expressing a diseased state in themselves, but rather a diseased expectation on our part.  For the most part, it does not require drugs – seemingly our answer to everything – but a rather simple answer: more movement. 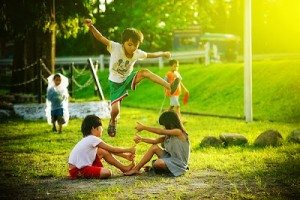