I’m looking forward to see you in April, hoping that it will match the timing with the cherry blossoms in Tokyo, such a magnificent show of nature’s delicate strength.

This is the weekend of the totally American holiday of Thanksgiving. I know there are harvest festivals worldwide, but Thanksgiving evolved in a unique meeting of the peoples of the east – represented by the Native Americans, still presumed to have come here from your region of the world across the Bering Strait into Alaska time out of mind – with the people of the west, who, against the wind and most of the odds, had sailed here from Europe.

That first winter was very hard on the Pilgrims, many of them died. An ancestor of mine, Capt. Edward Winslow, was sent north to Maine that late summer to get fish and supplies from the English cod boats that took shelter and shared grog on the island of Damariscove, just off to sea from where I live now, a tiny slit of an offshore harbor in continuous use since 1605.

I know that’s recent history for you Japanese, but for us fresh Americans, that’s about as far back as history goes. The fisherfolk on Damariscove all returned to England for the winter, but the Pilgrims stayed in Plymouth, trying to establish a foothold of religious freedom here.  In 1621, when the Pilgrims held the first Thanksgiving, the Indians (so-called) were invited, and all food was shared.

Subsequent years did not work out so well for the post-Asian natives who were progressively decimated, marginalized, and pushed west by the inexorable march of more and more not-so-post-European invaders crossing the ocean. The English in the northeast, the French in Canada and Louisiana, the Spanish in Florida and California, the Europeans made America their own mess – a melting pot if you are feeling generous, a messy mélange if you look at the race riots in Ferguson, the current struggle over immigration, and of course the wretched and shaming state of those original Americans now marginalized on reservations, most located on the worst of the land we took from them.

Thanksgiving  – the fourth Thursday in November, so not tied to any date – survived to became a wonderful holiday, traditionally a time to get together with the largest family gathering you could create, with as much food as you could muster.  Cooking a big turkey is traditional (though recipes vary widely, from grilling to deep frying), but hams, geese, and roasts would do, and of course the more modern vegetarian Thanksgivings with tofurkey or lentil loafs.  The point was to get everyone together and eat.

Thanksgivings of my youth in the 50’s and 60’s were at my aunt’s house outside of Boston, which in those days was a 5-hr drive so we stayed for a couple of nights of family mayhem.  There were games of touch football, many awkward or joyous conversations with people you otherwise never saw, as children passed in and out of schools, in and out of marriages, and as the elders sadly died and were mourned when they didn’t show up the next year.

Every family has their own traditions – ours were name tags cut around whatever child’s hand with a beak and eye added to the thumb to make them look like turkeys.  A place for everyone and everyone in their place – they were wonderful occasions for a child, and I daresay in those days even the adults had fun.  Over the years, the football moved inside onto the TV, and with increasing communications the actual visit became shorter, people arrived later and left earlier, and only the shell was left.

More recently, along with the commercialization of Christmas and the rest of the American calendar, Thanksgiving has lost whatever religious or historical connection it had, and merely become an excuse for too much food and drink with whomever’s around – families are so mixed these days, which is neither good nor bad, but it doesn’t lend itself to consistency or tradition.

Worse, the holiday has become simply a prelude to Black Friday, the day after Thanksgiving which has become such a shopping day that it earned its name not from the crucifixion of Christ – that’s another Black Friday associated with Easter – but rather from the amount of shopping in that one day can turn the bottom line from red ink to black in a single day.  It went from something sneaky you could do – run out and do your Christmas shopping on the day after Thanksgiving when everyone else was comatose or hung over – to a hyped event in itself.

So thoroughly has the commercialization taken over that sales begin sometimes at 5pm on Thanksgiving Day itself, or if constrained by local law, at midnight as Thursday turns to Friday.  Some people camp out and line up in the November cold just to shop for bargains when stores open on Friday morning.  We no longer produce anything in America, we just consume, consume, consume – there is no greater sign of the inexorable decline and fall of the American empire than our consumption patterns, which I fear we are exporting to your country and around the world.

But to circle back in again, this Thanksgiving we had an unexpected snowstorm deluge the entire east coast, and our traditional gathering was cancelled, as my cousin’s house had no heat, no water, no toilets, no stove – we are helpless without electricity – so no way 40 of our relations could gather there – we still carry on the tradition we’ve kept through all 65 years of my life, and despite my complaining above, it’s a good one.  It’s fun to catch up with all the children, see then sprout neckties and jackets as they go through college, swap them for stained jeans as they raise young children, and then those children get sophistication, ennui, and head for the greater world.  It’s fun.

This year, however, the cancellation came on the morning of, so here we were, snowed in and without much food.  The first thing I did was to dust off my cross-country skis and head out across the fields into the woods, where I snapped this picture that prompts me to write to you, because the wet snow turned the trees from yesterday’s empty grey sticks to something that feels very like cherry blossom time in Tokyo – snow clinging to every single branch to etch them into the blue sky.

Of course, the snow weighs down the branches too, some bear the load in graceful arcs that carry them toward the ground like your bridges, some dolloped with white frosting like a German fairy tale, while others bend like old men, burdened and grumpy. Still others break under the weight, and it is these that have taken down the power lines and rendered us grid-less and back on our own resources.

Grid-free is more like it. I stop by the neighbors’ houses as I ski back home, just to check that everyone is alright and got their wood stoves going, and in the process gather up a new ‘family’ and we organize an impromptu Thanksgiving, using our oven (we have a generator), Annie’s house (she has a great woodstove warming the house) and Inca and Randy’s food (they had a crowd coming, but they can’t make it through the snow – so they’re overloaded with food). With my three generations of women – my mother, my wife, and my daughter – there is family enough, and the kids of the larger family will just have to be another year older before I see them again.

The world is full of ‘family is where you find it’ stories, especially in these days of easy travel and patched-together groupings, so I won’t belabor the point – this has gone on pretty long already when I just wanted to show you the ‘cherry blossoms’ that appeared so early in Maine.  I wish you the joy of the harvest season in Tokyo and look forward to seeing you soon. 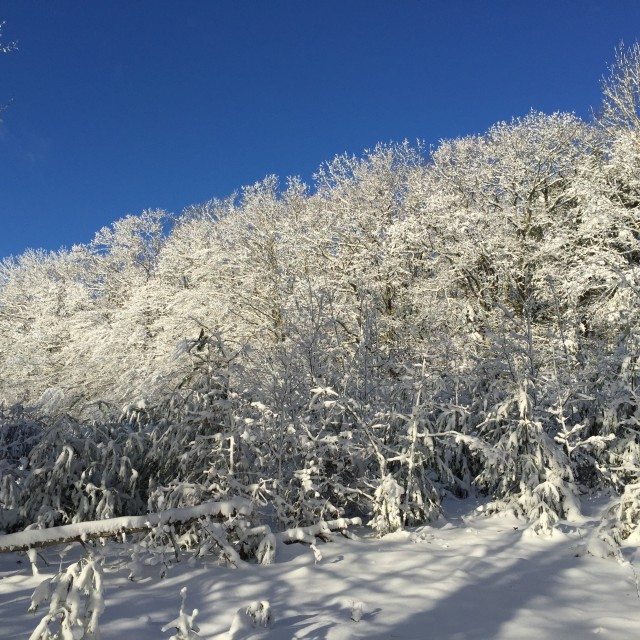