This would have the effects he then attributes to the gamma system – smoothing out (reducing) and decelerating muscle contractions/tensing and increasing natural resting length after a masochistically endless stretch (although this may be more due to fascial plasticity than to neural effects).

I still do not see how this smoothing out of contraction helps make learned movements automatic (thereby allowing learning attention to move on to other simultaneously done movements), other than to make movement easier/more efficient. But at this stage of learning my trade, this is more a topic of curiosity than necessity.

Thanks for the clarity of the review on the muscle spindles/Golgi tendon organs, which I never quite got before. I am enjoying the microscopic structure, which might help any improvised treatments that care may later require.

Bill, you have so much right and a good grasp of the medium of your art.

Let me see if I can straighten this out for you, as it is directly applicable as well as reaching toward an understanding – of which I have only the rudiments – of finding out how the neuromyofascial system really works.

One essential way that is just really dawning on our practical applicators is that the brain/body doesn’t organize movement according to muscles as we have taught and thought about it since forever, it organizes movement via neuro-motor units which are on the order of 10-100 muscle fibers within the muscle (even fewer in your eye and tongue muscles for fine motor control, but even more in your butt where each nerve may command several hundred muscle fibers).

Smooth acceleration is not a matter of muscle by muscle recruitment but instead coordinated individual neuromotor unit recruitment mediated by a hundred local variables but principally mediated by the brain coordinating incoming telesense signals with remembered series of similar previous attempts at acceleration – but this is a heavy sentence, let’s unpack it.

Each neuromotor unit acts within the muscle, pulling very specifically within that muscle in coordination with the downstream portion of the tendon or whatever fascia that neuromotor unit affects (which could include epimysia – the cling wrap around the muscle, or the intermuscular areolar and septal tissue) – all highly specific, all programmed through memory blending with perception and (when life’s exciting) predictive guesswork, the hallmark of human edge endeavor. 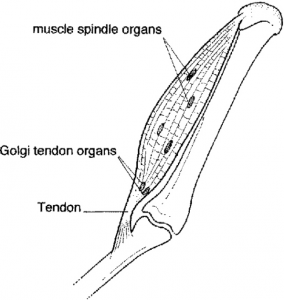 Each neuromotor unit pulls on specific muscle fibers which are linked specifically to tendon fibers, which feed signals to the GTO’s which send signals up to the same section as the spindle serving the neuro-motor unit. Stop thinking muscles, start thinking neuromotor units.

OK, now to the units themselves, and specifically the gamma system. To achieve this smooth acceleration, the nervous system adopted two small and simple machines, the muscle spindle for length and rate of length changes, along with the GTO in the downstream fibers for measuring load. 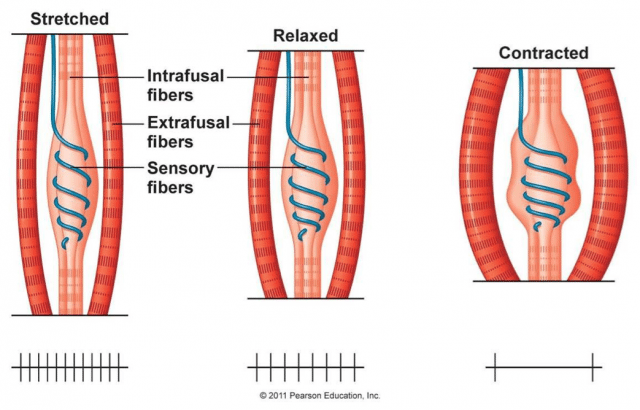 So in this picture, you can see the muscle spindles, and how they are going to signal more when stretched, and less when the muscle is contracted.

Enter the ‘fooling’: In order to get a very smooth acceleration of force transmission and resultant stability out of most of the muscle mass while the few bits do the task at hand, the neuromyofascial web devised an ingenious plan. Put an extra small motor nerve – let’s call it Gamma – into the ends of the spindles, where it could tweak the elastin fibers within the spindle. This little motor signal contracts little fibers at the end of the spindle, thus ‘fooling’ the spindle into thinking the muscle tissue around has been stretched. The spindle reacts to that interior stretch by sending a signal to the spine, and the spine reacts in its usual way to contract the unit. 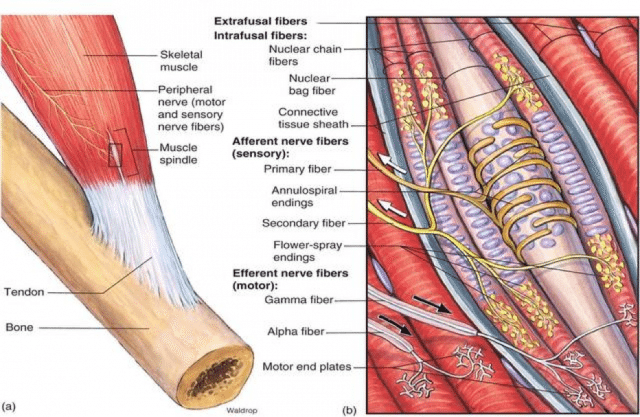 Here you can see how the Gamma fiber can tweak the spindle, and ‘fool’ the spine into contracting that neuro-motor unit down the Alpha nerve to the muscle.

Roundabout, you might say: The brain sends a ‘cheap’ signal all the way down the Gamma nerve to stimulate the ends of the spindle, the spindle signals back to the spine and the spine sends a signal back down the leg to contract the muscle – surely a direct command down the Alpha motor nerve would be faster? Yes, true, faster, but less coordinated. So this ‘fooling’ system, the Gamma system, this down the muscle, back to the spine, down to the muscle again craziness can only be used when your body knows what’s coming, when you can plan ahead that extra micro-second based on previous experience.

A kid hammering a nail for the first time uses all direct Alpha motor nerves; you putting that 6 penny into the decking with one stroke use mostly the Gamma system, employing the Alpha for minor adjustments to the remembered programming for wielding a hammer. Step from one room into another that’s two inches lower than you thought it was to see how precisely your Gamma system prepares you for what it thinks is coming.

Various levels of programming – and neuroscience is beyond my ken – contribute to these ‘advance stabilization programs’ (my term – central pattern generators is also used) but the cerebellum is thought to be the primary place of storage for these accumulated memories of patterns of firing of the sensory spindles and GTO’s and the successful completion of movements.

A child learning to tie its shoes uses all Alpha motor patterning because he doesn’t have the back up of enough memories to get Gamma patterning. But you can be talking while running the familiar programming of these feelings of these familiar laces against your fingertips forming predictable patterns that you just ‘run’ below the surface.

The question then becomes how do we best get new, less stressful patterns of movement through the surface cortex of the Alpha programming to permeate into the deeper Gamma – cerebellar – basal ganglia – brainstem part of that response system. In turn affected, of course, by the autonomic – vagus – neuroendocrine – hippocampic alarm part of the neural system – but that’s another story for another day.

Hope that answered your question. 🙂