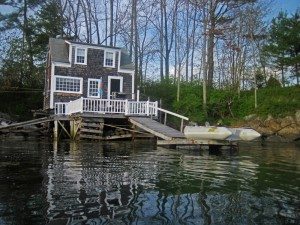 After the long Maine winter, spring is a hurried time of getting out the wintertime dust and getting everything ready for the glorious Maine summer, which some have described as ‘six weeks of bad sleddin’.

Because we live on the water, I have a lot to do in that short season around the pier and the shoreside. One of those tasks is to set the runway and float in front of our small cottage. I maneuvered it off the wooden track of the ways and over to the deck it hangs from. The float is held in place with ropes tied off to heavy anchors, so that it more or less stays in place in the twice-daily 10′ tides.

The runway is held to the deck in a couple of jaws with holes through which we run an iron pipe that acts as a hinge. To make sure the pipe stays in place while the wind works its will and the tide takes its toll, there are nails through both ends. The nail in one end was already bent (so it doesn’t fall out), and I put a nail in the other end, but, not having any pliers handy, said ‘I’ll come back and bend it later’. The last finishing touch on a job.

But of course I never got back to it and in the winds that accompanied the recent rains work on the pipe, which turned until the unbent nail fell out, the pipe worked out of the jaws and the runway fell sideways, twisting the iron jaws, breaking the handrail, and gouging the dock as it lay there in the river’s chop.

I was bringing the boat upriver from the yard – a very pleasant spring task of its own – and there was the cottage dock, on its side, clanging and squeaking in the waves – by now a big repair job on several fronts.

We got it put to rights, but it was a lot of work, and a cogent reminder to me: finish the job.