Cairo, Lagos, Johannesburg – I imagine these are the three largest cities in Africa. Jo’burg built up around the gold mines, but is now a gold mine of its own, certainly a big-business town with lots of traffic. Like Mandiba (Nelson Mandela, who is in hospital somewhere in the city, may he be allowed to move on peaceably) it is palpably sinking since the last time I was here.

Jo’burg is a city behind walls; my pleasant little guest-house room key has a button that opens the swinging iron gate. Even the schule (sp? synagogue) where my classes are being held has a rolling metal gate and a parking lot guard. My host handed him 50 rand – $5 – for his day’s work. Unemployment is really high, and like everywhere else, the country folk head for the city in droves – no wonder thievery is rife. The whites blame the government, with some reason, the government blames the leftovers from apartheid, with some reason. 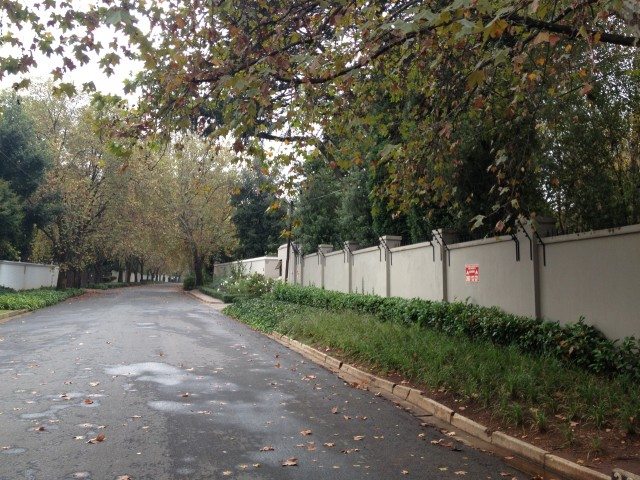 I walked out last night at dusk – against advice – to get some food. It was a pleasant evening (after a thunder shower – everywhere I go I bring cold and rain – so far this year, I have brought rain to Phoenix, California, the Karoo desert, and Johannesburg – anyone want to hire me for a rain dance?) as I traversed a hilly neighborhood to a grocery shop. I was the only white I saw out walking, and the most threatening face I saw was on a black policeman.

Is it like New York – where the reputation for violence is far worse than the actuality? Reluctant to test the proposition in the gathering dark, I didn’t stay walking, but carried my food home to eat behind my clanging gate and locked doors.

This is Africa – the feeling of Zimbabwe invades South Africa and who will win? Yes, this is the leftover of Cecil Rhodes and an oppressive, paternalistic white regime. But also yes, the ANC of Jacob Zuma is not the ANC of Nelson Mandela – corruption is so rife and efficiency non-existent. This is a crucial experiment for African democracy, and one that is at least on a dip, if not poised for failure on a grand scale.