It’s a family joke that before I was into muscles, I was into mussels. Back in ’73 – yes, children, that’s almost fifty years ago – I started a mussel-farming business under my father’s direction in the Damariscotta estuary I now call home again. Trying to copy Spanish methods of the Galician rias from afar, I put together a raft from four telephone poles, which promptly sank under the weight of the ropes that the mussels were supposed to grow on.

It was a staggering set of logistical and technical problems for a green 23-yr old to take on, but I was game. I had graduated from Bucky Fuller university in late 71, had a brief sojourn with Tom’s of Maine, but thought Tom was going to fail (how wrong I was). Selling soap, however, was not my life, so I jumped at the chance to take on this sea-going environmental project. What could be more on point?

After 6 months of incompetent but gleefully Fullerian ‘anticipatory design’ on my part, my father quit the University (and thus could do something commercial again). I gratefully handed my mess off to him and took off in a van searching for my next teacher, who turned out to be Ida Rolf.

He gratefully received it back. He was not the easiest of bosses, but neither was Tom and neither was Ida. My dad went on, I am happy / sad to say, to slowly and genteelly lose his shirt in the in a quixotic joust with the business side of aquaculture. We were proud to be Maine State Aquaculture Lease No. 1 – the first company to lease a part of the sea to farm. So we made all the mistakes for others to learn from.

In the decades that followed, many leases all up and down Maine’s coast were taken out for oysters, salmon, mussels, seaweed, so many that the NIMBY forces are now arrayed against them. Dad became the dean / grandfather of aquaculture in Maine, and this wharf a place of pilgrimage or folks coming into aquaculture even after he retired. Another sea-farmer tried to make a go of it, but it was all fallow and overgrown with kelp when I moved back onto the farm at the turn of the century, after Dad died.

Before he died, he asked – and I know it was hard – if I would carry on the mussel business. The answer required a gulp and a long look: “No, Dad, I like my chosen trade” and softened it as I could: “But I promise I’ll keep the wharf open for those who do want to farm the sea.”

I’m good as my word – I bought the lease back, and let a third fella have a go at the mussel farming. Three other aquaculture companies and 3 lobster-people (face it, Jaimie is more of a man than most of ‘em) get access to the sea via my pier. Today, finally, a good decade later I was out on his processing barge, just arrived here for the harvest. How my father would have loved this moment!

A big metal hopper goes under to collect ropes that have waved gently beneath the surface for about 18 months of growing out. (My Dad and I used a jury-rigged basket.) Hosed of kelp, crabs, and those damn tunicates, the remaining mussels are hoisted in huge bags into a funnel, where water and brushes declump them, and clanking belts and screws to clean and grade them. While it was a contrast with the loving attention my father and I gave to each peck we bagged for local restaurants – enough to break even some years – these machines (plus people) turn out an amazingly good-looking set of mussels, scaled at two orders of magnitude larger volume.

Dad would love that the metal barge was old and ‘recycled’ and listing a bit. Dad would love that the various parts of the Rube Goldberg contraption were from Spain, the heart of it Italian, and the grader from the Netherlands, all methods Dad studied in trying to get such volume going here. He would love that this crew of four have learned to service the machines themselves. And he would love to see the clean protein, attractive seafood leaving the river, having employed people gainfully with a minimum cost to the environment.

I cheered the guy on – he knew my Dad, and the grandfather of aquaculture in Maine would be very proud to see our chosen ‘crop’ finally making it to market in a scalable way. He gave me a bag, right off the boat. 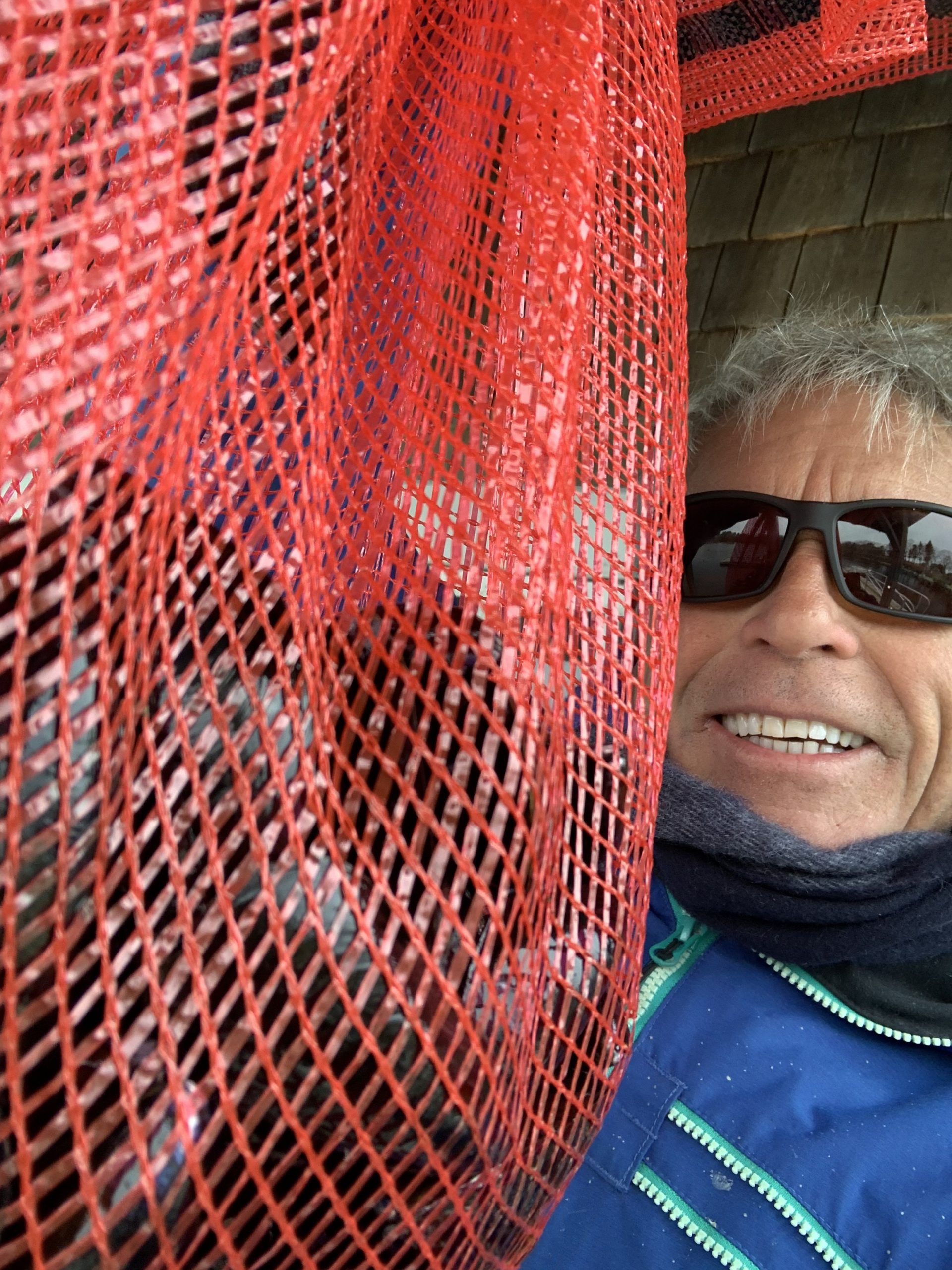 And then it began to snow – good ol’ Maine in the ‘spring’.