Usually i like to work first and be touristic after, but in Israel my first full day was doing the tourist triangle that everyone does, and I can see why.

The biggest initial surprise in Israel is how good the food is – always fresh, plentiful, and very tasty. Last night we went from the airport to Jaffa (famous for its oranges – hence Jaffa Cakes, for my British friends). The Eastern Mediterranean rolled relentlessly and breezily ashore onto the long beach that stretches up beyond industrial Tel Aviv to the north, but we walked south past the familiar sight of rusty trawlers and tourist tugs, live-aboards clearly going nowhere and true ocean sailors chomping at their bits as their halyards clanged.

We chose a restaurant that smelled good and 15 (I counted) small side dishes came to our table immediately – hummus, tsatsiki, baba ganoush, beets, egg salad, cilantro, guacamole, tabouleh, falafel, relishes – large thin pitas as carriers, and all washed down with fresh mint lemonade. I was already full when the local fish arrived, perfectly hot from the oven but perfectly cold from the sea.

On the way back we saw a public square where Arabs and Israelis alike- they mix and get along very well in this ancient seaport – young and old alike, good and awkward alike, all danced the tango. 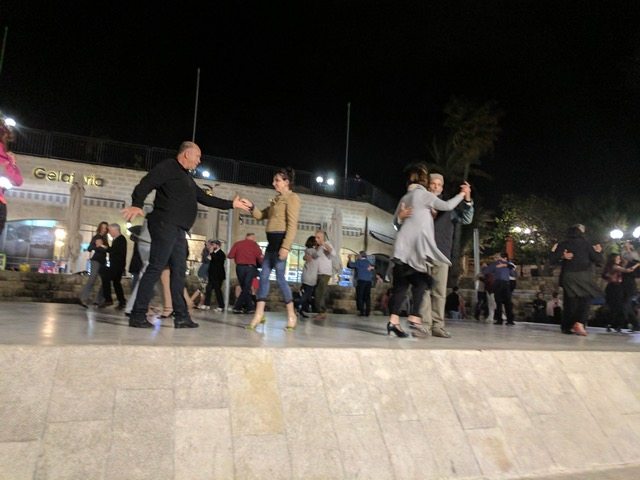 Down from here are low, cramped, and well worn sets of steps that lead down to the harbour, which would not be out of place in the south of France, Italy, or Malta. It all feels very Mediterranean.

This Sunday (their ‘Monday’), we started out at 6:30 with our guide Amir, thoughtfully provided by the organiser, Mark. Amir, 74, loud, certain, and bluff as all Israelis, and sporting a newly fixed ankle, had been tour-guiding for 50 years – there was nothing he hadn’t seen already, an easy conversationalist. We rolled out of Tel Aviv, past Jerusalem and down, down, down a bajada to Masada – a place of pilgrimage for Jews everywhere. A fortress redoubt built by Herod, or at least turned into a palace by him (the guy slaughtered the innocents in Bethlehem and had 20-some palaces around Israel run by a passel of slaves – like him or not, and he wasn’t even a Jew himself – he certainly left his mark). Fabulous view, and like the Acropolis in ease of defence.

Much later, around 70CE, during a Jewish revolt against the Romans, around 1000 Zealots (the same sect that Judas Iscariot belonged to) withstood a Roman siege around the plateau, finally committing mass suicide rather than surrendering to the enslaving Romans. I understand its relation to the Jewish character, especially the Israeli ethic – never ever ever give up – but that’s not what I call a successful outcome and t was not a happy-feeling place. The ingenuity, though, involved in living on a high plateau in a desert was everywhere in evidence – even a Roman-like bath system fed by huge cisterns, with frescoes and mosaics reminiscent of Knossos on Crete. 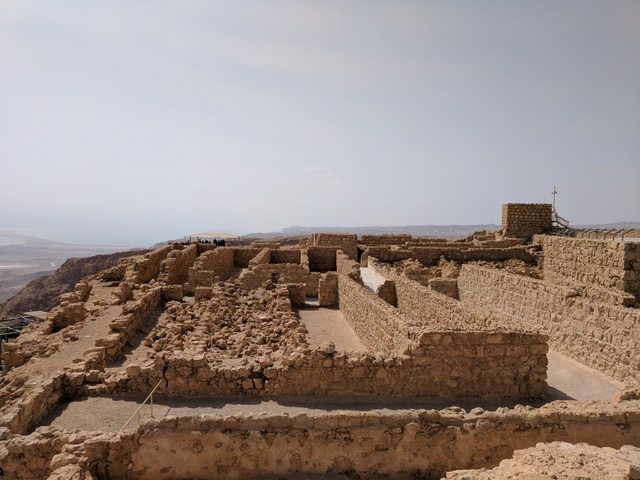 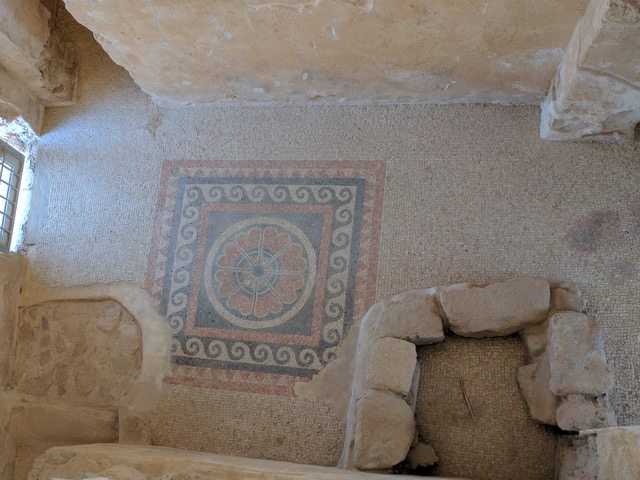 We passed a Hasidic rabbi ensconced in a small chamber in the original synagogue, copying the sacred texts in this most holy place – for a few shekels he inscribed my name and Quan’s in Hebrew script with his calligraphy pen, passing it through the glass as I passed a donation back to him.

From the high and arid Masada we could see across the Dead Sea to the mountains of Jordan of in the haze. The sea has been receding for years – it was clearly lapping the bottom of Masada in olden times, but has receded especially in recent years as the Israelis have diverted water from the Sea of Galilee and the Jordan River, so the only source of water has dried up. They are seriously considering importing water from the Red Sea, 200 kliks by pipeline to the Dead Sea. You can see why they would want to try such a crazy scheme – the lake is lowering by almost 1 metre / year and is much reduced from even Yaron’s childhood. 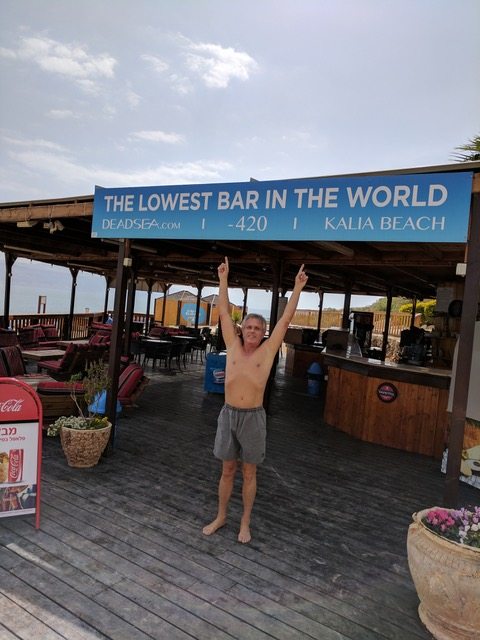 I’ve been in Salt Lake and Mono Lake, but the Dead Sea was the most concentrated, oily with magnesium, along with 60 other minerals including sulphur, which immediately reminded you of every tiny cut on your body, as we covered ourselves with mineral mud – I washed mine off quickly as it stung my face like crazy. After I finish writing this, I will need a bath to get the last of it off. Yes, you float very high in the water, but it was – well, been there, done that. We got a bit of a meal at the cafeteria at the car park, and once again, even their cafeteria food is superior – fresh, light, and well balanced – to much of what could find in America’s finer restaurants.

We had a long discussion of the kibbutz movement, how it started very communistically before WWI, but ended up dividing over the question of communistic vs capitalistic – the farms often did not produce enough wealth to keep the kibbutzim in funds, so they had to turn to industry, and also the question of separating the children from the parents – a characteristic of socialistic regimes everywhere – failed to fly with returning Jews, especially from the West, in the 1960’s. Yaron himself was at the cut-off date, and so got to spend time with his parents when he was on the kibbutz all his entire early life. 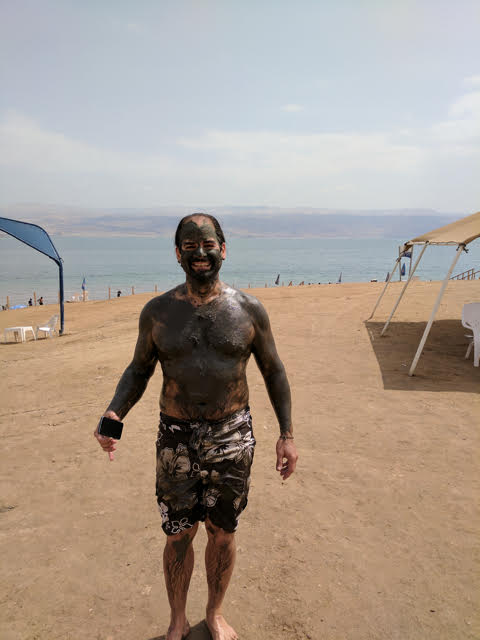 From the Dead Sea, we went to my favourite visit of the day – to the place where it is thought that Jesus was baptised by the Essene gnostic John.  The River Jordan – so freighted with hymn, gospel, and legend – winds its muddy way through the desert lined by reeds.  Of all the sacraments, I have long favoured baptism the most (and extreme unction the least).  I also have studied Essene philosophy (and diet) way back when in my California days.  i knelt by the water and let it pour through my fingers, calling images of that renegade John the Baptist, excoriating the bishops of his day, and finally having his head served on a platter.  In fact, though, I was sending thoughts to Annie, who was closer to Jesus than I have managed, putting a bit on my forehead in her name.  So many churches surround the spot from all the world’s Christian denominations – Coptic, Ethiopian, Greek Orthodox, Catholic, etc. 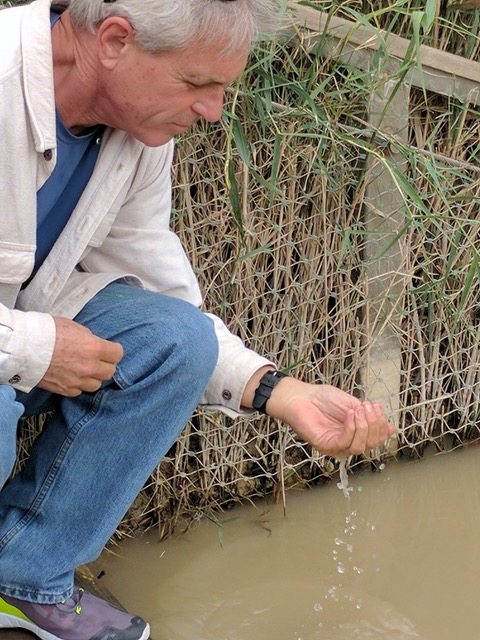 Others were more into it than I was – one group of German or Austrian Lutherans were busily singing and getting dunked in the muddy water in white robes thoughtfully provided by the concession stand. Americans too were getting reborn in the river. “Them that goes to church is them what needs it most” is an American saying I have chuckled to – even so, I might go all ‘O Brother, Where Art Thou’ and jump in with them – but I was already itchy from the Dead Sea, and it looked less than inviting.

There’s another thing, too: The steps you see on the other side are the Jordanian side of the border, which since 1967 runs right through the middle of this tiny river (it would be a stream at home). On the Jordanian side, just out of this photo, was the Jordanian Army guard with his M16. Just out of the photo in the upper part of the stands stood the Israeli guards, with their M16’s (I called them Uzi’s and was immediately corrected in one breath by both Yaron and Amir – the Israelis know their guns). The presence of guns all over is a fact of Israeli life, but not a pleasant one for me. Will we be that way by the time we’re done with Donald Trump’s Amerika? I hope not. 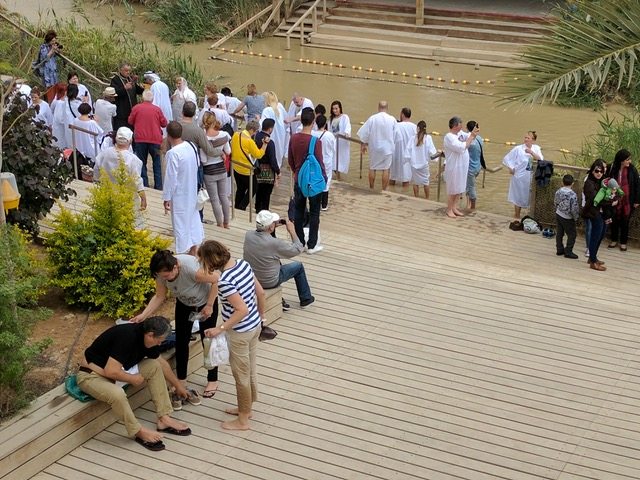 On to Jerusalem – which I have been eager to see for many decades. Too many pictures and rushing imagery to do it justice, but here are a few to give it a feel.
The Jerusalem limestone lines every building. 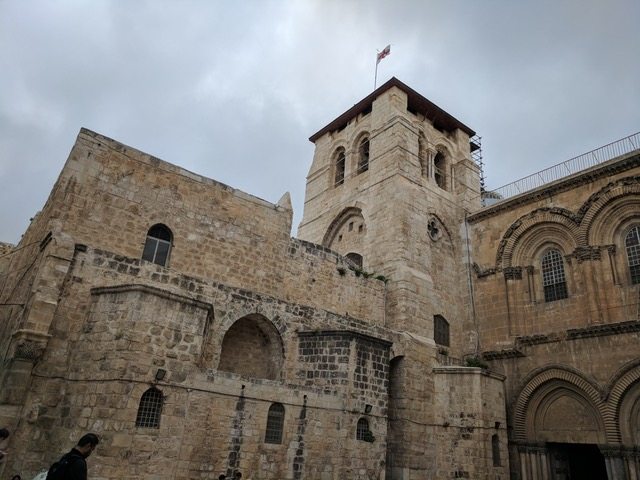 The doors are fantastic. 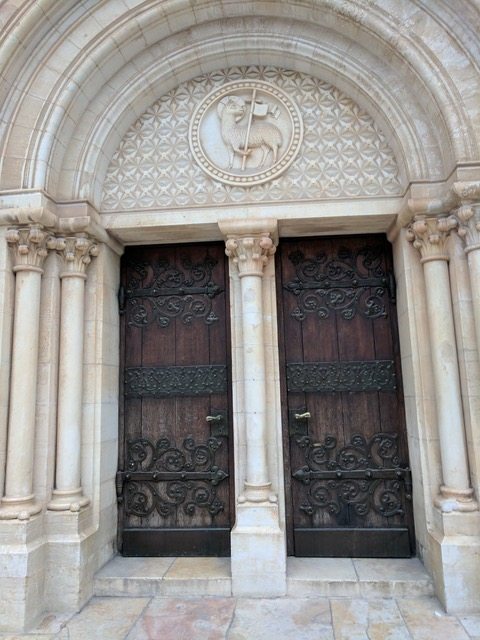 Inside the Church of the Holy Sepulchre, where Christ was laid and then arose. We walked most of the stations of the cross, though not in order.
Amir used his influence to elude the long lines, and Yaron and I were soon in the holy of holies, under this huge dome in the tiny church (? – shrine) whose top you see in this picture – I was reluctant to sully the church with my iPhone.

Whether these spots are truly original or authentic has little to do with it – they are worn down and imbued with all the people who have given their faith to them. Actually in the sepulchre, the stone was smooth from pilgrims’ touch, and had an eerie feel. Once again I genuflected not in my own rite, but in Annie’s. 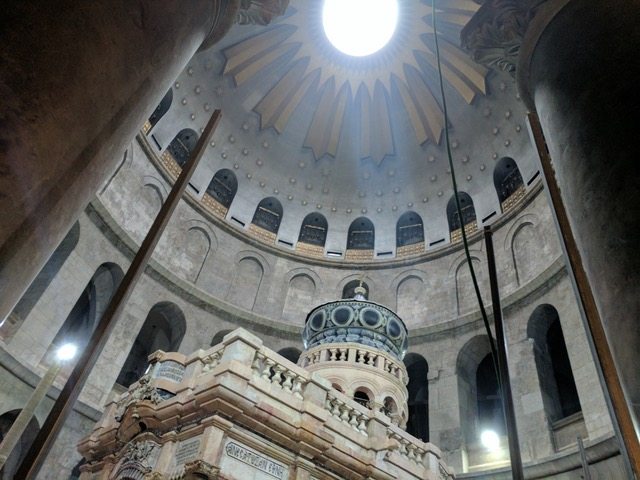 This is the anointing stone, again perhaps apocryphal, where Jesus’ body was oiled for burial. 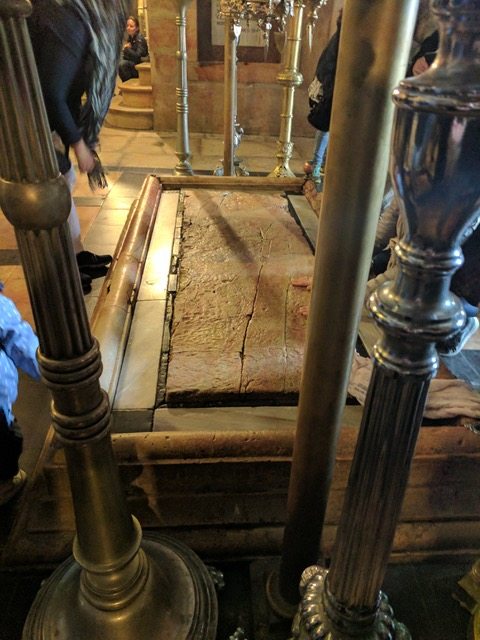 We walked through the Christian quarter where all these bits are – here are some Coptics on the trees – to the Moslem quarter with the long corridors of sook (covered bazaar) – once filled with treasures but now filled with kitsch – and into the Jewish quarter. Again the soldiers and their threatening gunbarrels are everywhere. You remember the Palestinians who went crazy and started stabbing people? It happened here in this quarter a couple of years ago, and the Israelis are understandably reluctant for it to happen again. It’s a conundrum – I wouldn’t want to be hacked at in the market either, but neither could I live under all this obvious armed crowd control. 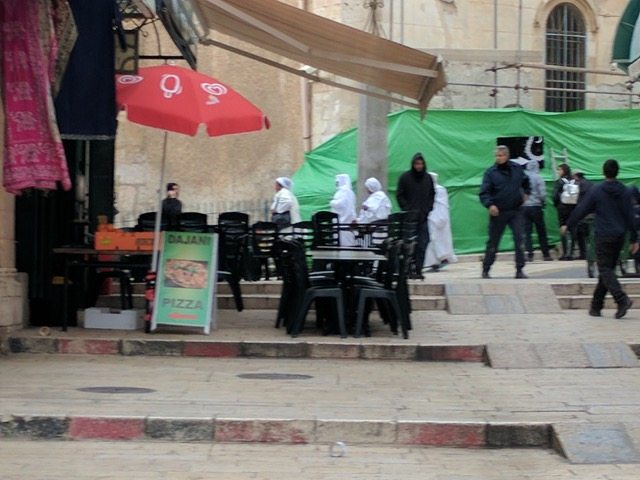 And finally to the Wailing Wall – the wall of lamentation – where the second temple was destroyed, never to be rebuilt. The Al-Axa mosque, perhaps you’ve seen it in the news, is the dome to the right. The crowd to the right is the women, separated in worship at the wall from the men (again, hard to approve, but when in Jerusalem…) on the left, and the few men on the left are truly swaying and praying up a storm in their large hats and black suits. Once again, I use the local custom – write a prayer and stick it in the wall – to commend Annie to Jesus and send her blissfully on her way. 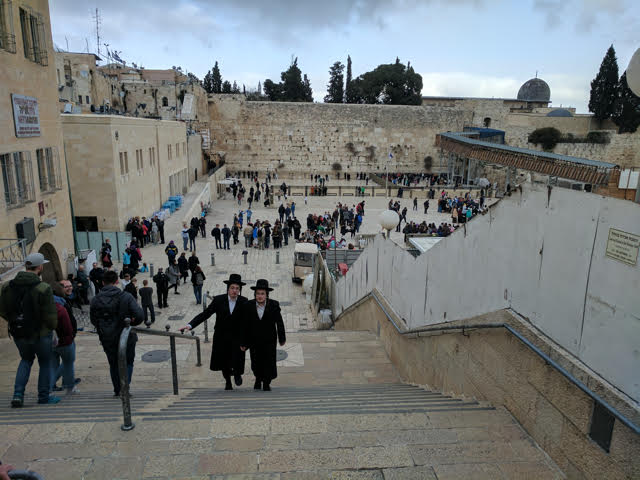 You can see the many messages behind my head.  Tom internally (I am a WASP, after all) wailing out the last six months of loss – ‘Adonai, Adonai’ – at the Wailing Wall.  Annie was very much with me today. 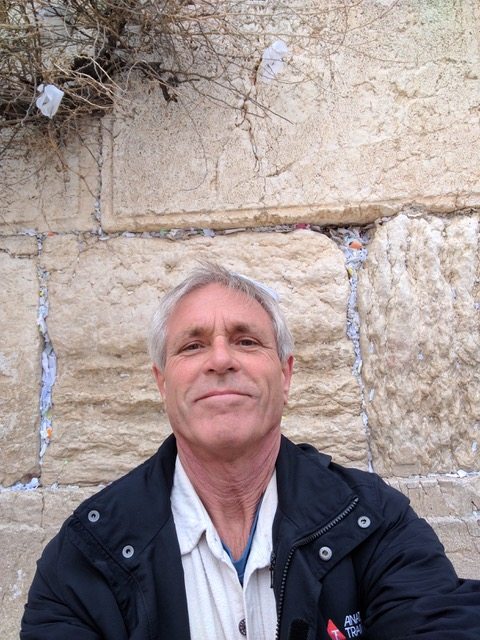