Sailing is a selfish pleasure, and often a solitary one for me – as yesterday, when the list of to-do’s as long as my arm suddenly faded in front of 22 knots of westerly wind.  Jumping aboard, loosening the lines, raising the sail, and backing her off the mooring – I have escaped!  The boat turns, and then leaps like a dog going for a walk into the pressure of the breeze.  Above 20 kn, the air becomes a medium you live within and lean into, accounting for it in your movements.  And your movements become economical because to keep a 16,000 lb (7000 kg) machine balanced between the thicker medium of water and and the thinner (but at this speed very palpable) medium of air is a second-by-second play, especially when we have that gusty west wind.

With the tide I was sluiced the 7 miles down the river in less than an hour, and came to the buoy outside Heron Is.  This photo was as close as I could get to the undersea ledges, and as it was I almost got sucked into the undertow before I laid off.  The picture does not convey the power of the sea or wind – the sea bringing in big swells from the offshore storm in the Atlantic, the heavy metal can tossing like a cork in the screaming wind (and by now it was screaming) tearing the tops off the waves and sending the spray backward into a rainbow.

Beautiful to see, but hell to single-hand a boat this close to the rocks in such a swell.  The water was now green with white caps tumbling over each other in their eagerness to slap the topsides.  The rigging was keening, as if in fear, from the wind.  Heading back up river, rail under, one foot on the side of the cockpit, teasing the boat upwind and uptide.  The power of the wind is ferocious, but as long as nothing breaks, I am safe and within my capacity, even with water spilling over the edge and everything below falling from port to starboard as I tack.

So said E. B. White. I spent yesterday afternoon appreciating the beauty of creation, and dancing within its opposing forces.
I did nothing to relieve suffering, while in the streets of NY hundreds of thousands of others more inclined to relieve suffering raised a mighty shout to the corporate world: “You are not paying true costs of your extraction and exploitation.”  Neither are any of us of the ‘first’ world, we who benefit from the ‘energy slaves’ provided by the fossil fuel industry.  What an economic opportunity awaits those who can develop the means to deliver ‘income’ sources of energy (wind, solar, tidal – you don’t use ‘em up by using ‘em, as opposed to ‘capital’ courses – coal, oil, gas, uranium – that inevitably become harder to find and then ultimately disappear like the whales and their whale oil, which is what we used before we refined petroleum.)

So I lifted my voice with their shout, torn to shreds as it was by the wind, falling on no one’s ears but a cormorant’s, and maybe God’s if she was listening, though at the moment, the temporal power lies with the oil companies and their truly obscene profits.  So I prayed and enjoyed and didn’t go to NY.  But no oil, no dinosaur remnants, were used in the prayer of my sail; the boat is powered by the sun at play on the surface of the earth. 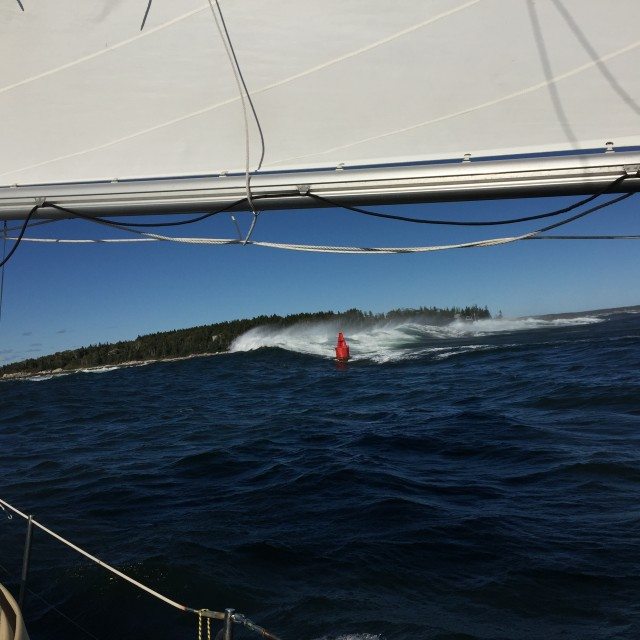