Q: The question that the student has is: “If the fascia is more ‘stretchable in a horizontal means, why are we working with the grain (AT – up the SFL)?

A: Let’s first distinguish between connective tissue structure and myofascia.  Even though this image is brownish in Eric’s microscope, it is pure tendon – the strappy tendon of the latissimus near its insertion in the humerus, and obviously the tendon is running down to up in its orientation.  There’s no muscle in this video.

The video shows that the tendon is easily stretched sideways, which makes sense, as in the body there would be very little sideways tension on the tendon so it would not build up cross-bridging to resist that force, because that force would not show up unless you were rubbing the distal end of your lat back and forth very vigorously on a fence post.

On the other hand, the tendon is required to transmit force its length to the bone every time you contract the lat or hang from a chinning bar.  Therefore the lat tendon is well-organized and cross-bridged to transmit force from muscle to bone without much stretching (a little elasticity as the ‘crimp’ is straightened, but not much).

So, yes, it’s more stretchable sideways, and if you wanted to widen the tendon (though I don’t know why you would want to), then it should be easy.  But lengthening the tendon from origin to insertion is a bit more difficult, because the fibers are so bound together in such a way as to resist getting longer.

(Therefore I tend to poo-poo rolling on your iliotibial band, at least with the intention of making it longer; it’s too tough, too well-connected within itself, to get any longer through tool or elbow pressure.  Might separate it from the vastus underneath (though that’s controversial), or improve the arteries’ elasticity (proven), or improve proprioception (probable, but of limited long-term value).  The lat tendon is in the same category – go ahead, knock yourself out trying to lengthen the tendon part.)

Therefore we focus our work farther ‘up’ in the myofascia, which is much less resistant to change.  Working where the muscle meets the tendon (though you know that’s a convenient misnomer, as the collagen of the tendon and the collagen of the myofascia are one and the same net) provides the best neuromotor stimulus to lengthening, as this area is the richest in muscle spindles, connected specifically up to corresponding Golgi Tendon Organs.

Working even farther back in the belly of the muscle means you are putting your hand pressure where the endomysium and perimysium (at least) are at their maximum ‘fluff’, maximum cotton-candy-ness, maximum angle between the cross-crossing fibers, as in this picture of the endomysium (this at a much smaller scale than the tendon film).  It is in this fluffy fascia that we have the best chance of lengthening through melting and sliding the collagen fibers along each other.  The fibers themselves don’t lengthen, they slide on each other and rebond. 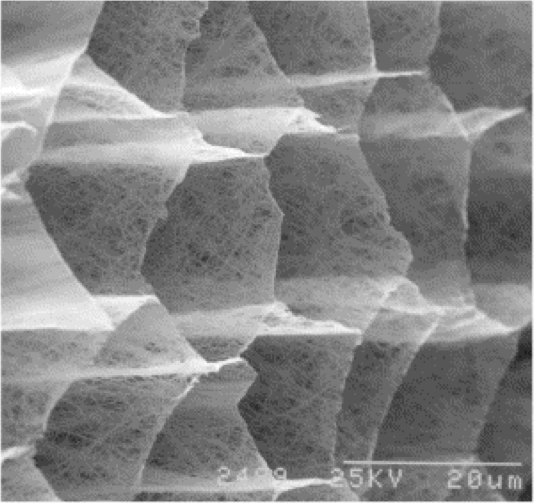 Since what we want to do in a locked-short muscle is break / melt the bonds between these angled fibers to allow the myofascial unit to lengthen, we run along the tissue in the same direction as the muscle fibers, presumably unwinding some of the muscle tension, presumably hitting some trigger points along the way, but absolutely melting the hydrogen bonds that run in that direction and keep the tissue from lengthening.

In a locked long, eccentrically loaded muscle, the major bonding is across the short diameter of the rhombus, ergo at right angles to the muscle fibers, so we go across the myofascial unit. (Again, we do it in the muscle; this would only be effective on a tendon done very slowly and finely to un-build adhesions between the tendon and the Guimerteavian sheath around the tendon.  Inside the tendon is just like in the muscle – interwoven spiral of collagen, but the weave in the tendon is too tight and too well bonded to respond to our manual calls for length – we have to be up in the ‘fluffy’ myofascial honeycomb part pictured above.)  This cross-fiber work breaks up the built-up ‘horizontal’ interconnections and makes it easier for the muscle to contract without working against these ‘circumferential’ parasitic restrictions.

All that said, I am much more assiduous in making sure we are working ‘along the grain in all locked short muscles’, whereas ‘across the grain in locked long muscles’ is one of the ways I play with the locked-long tissue – but often obtain value from working along as well as across as well as obliquely with muscles that are chronically over-stretched, for example the thoracic erector spinae of a kyphotic pattern.

So in a locked-short SFL, or here on the latissimus tendon in the LL session, say, we would normally run along the muscle grain, either toward or away from the insertion (e.g. in the case of the lat, we often pin the musculotendinous junction and urge the client to move away from us by abduction the elbow – but the direction of stretch and tissue lengthening is still along the muscle).

So the answer to the student’s question is:  ‘Just because it is more stretchable that way doesn’t mean that it is therapeutic to lengthen it in that direction.’  Generally the therapeutic aim (like Eleanor Roosevelt, about whom this was said) is to ‘comfort the disturbed and disturb the comfortable’.  The locked short muscles are often comfortable in their shortness, and need to be disturbed along their length to reach a more normal resting length.  The locked long muscles are more disturbed (often with ‘noisy’ trigger points’), and need to be ‘comforted’ with cross fiber to allow the muscle cells to take a more normal length with more sarcomere overlap.

Please come back with any questions, I want this to be clear.