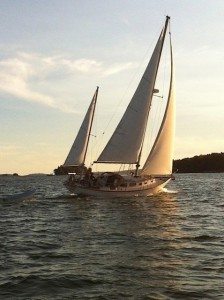 It’s been days and days of clouds and cold rain, so when it finally broke on Memorial Day, I settled the emails, ignored the long ‘honey-do’ list, and stepped aboard my yawl which was swinging back and forth on the mooring in the fresh boreal air.  Tycha was as impatient as I was to be leaning into the wind.  By the time I got my chores done and the last of the rain bailed out of the rowboats, it was 10:45.  With a rising tide and a bit of west in the northerly, I headed upriver to Damariscotta.

Tycha (it’s Tom’s boat, so it should be named after some Greek goddess or something, but I inherited the name; it’s an anagram of ‘yacht’) could almost be heard laughing in the gusts that would suddenly flatten us, sea water pouring in over the coaming, but you can’t hold Tycha down, and we flew up past the Darling Center pier, Salt Marsh Cove and Merry Island, threading the needle at the Glidden Ledges.

By the time I turned the corner at Dodge Cove into the row of oyster farms just below the town, the wind was shrieking in the rigging.  Clear, sunny, but the air was thick with 30 mile an hour wind.  One of the wooden rollers came off the shroud in the buffeting, but I managed to save it to repair later.  I don’t mind a big blow when I’m out to sea with room to run; the boat’s capable of handling it, especially under shortened sail. But a big blow up here in the river – if something breaks, it’s a matter of seconds until I’m blown downwind onto rocks.

The water was roiled and whitecaps were falling off the top of the waves by the time I sailed into the mooring field off the town dock – 12:15, only 90 minutes for 7 miles, much more of course for my zigging and zagging.  I secured myself to a mooring, and watched the line between two other moorings while I put the sails away – would it hold my big boat, sawing around as wind and tide were at cross-purposes?  I wanted to know if it started to drag.

Having more-or-less satisfied myself it would, I rowed in to my mother’s retirement home, stashing the rowboat in the eel grass, and joining the older crowd for lunch.  After lunch, I had to sit through the ‘Schooner Crooners’ singing patriotic songs (it was Memorial Day – but with the taste of Iraq still in my mouth, I could not bring myself to sing along to ‘God Bless America’.  I am still more of the mind of Reverend Wright: God damn, America, what you thinkin’ at?).

After the crooners (better named the corkers, but don’t tell them)I gave my Mom some massage for her neck, which has been bothering her since she’s been stuck in the wheelchair, and, kissing her forehead, headed back to sea.  It took forever to row back against the wind, but finally I was swinging aboard, and with just jib and jigger (the big sail in front and the little sail in back, but not the mainsail in the middle), I started running downriver, down the tide, and down the wind.

It was glorious – 6-8 knots most of the time.  I ran the full 12 miles of the navigable river, back down what I’d done, and then past our cove to Carlisle Island with its osprey nests, Hodgson’s Island with the huge eagle’s nest, Seal Rocks with seals slugged out on the ledges, sluicing through The Narrows by Fort Island, tide rips churning, slipping by the villages of East Boothbay on one side, the shipyards silent this holiday, and South Bristol on the other, the fishermen staying in today because of the wind.  I emerged from the river and opened into into the sea proper, and rounded Heron Island and the Bulldog, and then opened her wing-and-wing for the downwind run to Thrumcap.

I swung around to the sound of the surf on the end of Outer Thrumcap (Bald Head, it means) and flattened her down to close hauled to fight the tide up John’s Bay, Pemaquid light and Monhegan off to my right.  When the angle was right, I came about and bore down on Witch Island, backing left to enter the thin passage of the Thread of Life, and veering right around Turnip Island.

In the waning light I beat back up river in the last of the draining tide, using the back eddies when I could, still making pretty good time.  I was furling the sails in a quiet sunset glow and rowing the dinghy back to shore in the calm of dimsky dusk.  The river is 12 miles and I went fully up and down it, so at a guess I went 30 miles in an afternoon. Face raw with wind and sun, muscles sore from winching and gritting my teeth, hungry as hell – a thoroughly satisfying day. 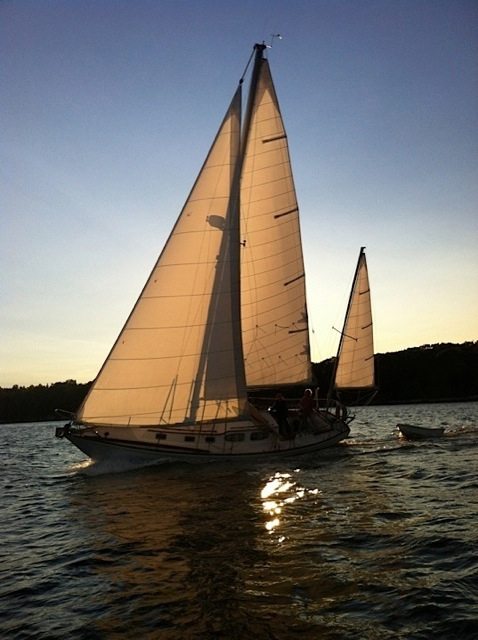