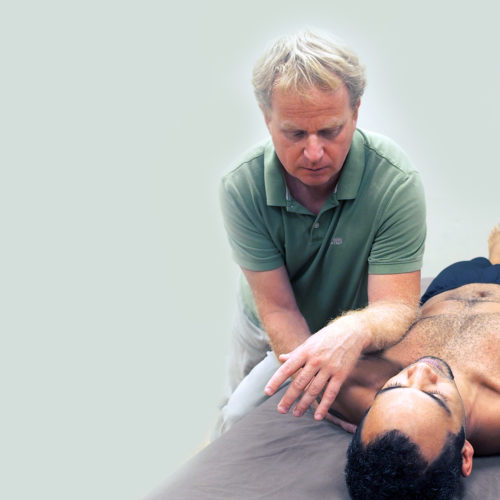 Magnus is a native of Sweden, and a graduate of Lillsveds Sport Institute in Stockholm region of Sweden, where he studied Anatomy, Exercise Physiology, Therapeutic Movement, and Sports Methodology/Biomechanics. He grew up playing tennis, which brought him to USA at first to play college tennis and study, and then teaching and playing. After a sports injury to his low back, Magnus decided to get out of tennis, and being inspired about bodywork, he went to Massage Therapy school in New Orleans in 1993/94. He received his 10 series in 1994, and discovered the Power of Structural Integration (SI) work in healing chronic injuries, and emotional scars. Always curious about the mind body connection, in 1996 he became a certified Yoga teacher with the Yoga Institute in Houston, TX, furthering his Mind Body education.

Magnus has studied with many well known Massage Educators and Yoga teachers, but is very happy to have found the KMI style of Structural Integration based on the Anatomy Trains concept, as developed by Thomas Myers, in the tradition of Dr Ida P Rolf.

Magnus has studied Craniosacral Therapy 1 and 2 with the Upledger Institute. He has also completed Visceral manipulation 1,2 and 3 with the Barral Institute.

He graduated in 2010 as a KMI-SI practitioner, and is a Board Certified Member of the International Association of Structural Integrators (IASI).

Magnus has studied many forms of movement therapies, such as Yoga, Tai Chi, Feldenkrais and Qigong. He is also a long time student of meditation, and maintains a daily yoga practice.

Magnus is constantly amazed by how applying simple myofascial manipulations and gentle movement education can assist in restoring the body back to its natural state of alignment and balance both in mind and body. He is committed to providing the best Movement Education service possible through his continuous work with, and study of the fascia in SI practice.

Magnus has worked in Chiropractic, and Medical Pain Management Clinics, and has had a private practice in Mississippi since 1994. He specializes in KMI SI work-the 12 series, and private yoga therapy in his office in Biloxi, MS. He is available by appointment only.